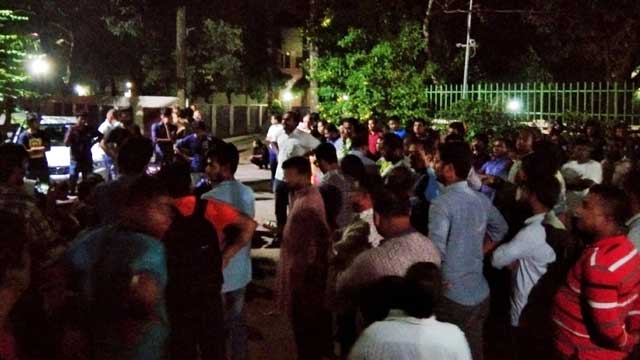 A section of students confined Jahangirnagar University Vice Chancellor Prof Farzana Islam at her residence this evening demanding her resignation for corruption and irregularities in development projects.

Over 100 students, who have been staging demonstration on the campus since long demanding removal of the VC, took position in front of the residence of VC on the campus around 7:00 pm.

“We confined the VC inside her residence. We will stay here until she resigns from the post,” said Mahtir Mohammad, general secretary of JU unit of Samajtantrik Chhatra Front.

The students and teachers were staging demonstration in front of the VC’s house till filing of this report around 7:20 pm.

The agitated students of JU have been demonstrating on the campus since August 23 demanding the relocation of three male students’ dormitories which the authorities planned to construct near Rabindranath Hall, and judicial probe into the allegations of corruption and irregularities that took place before the approval of these mega projects.

The students and teachers also protested against the corruption of the authorities and unplanned development works which would endanger the biodiversity of the campus.