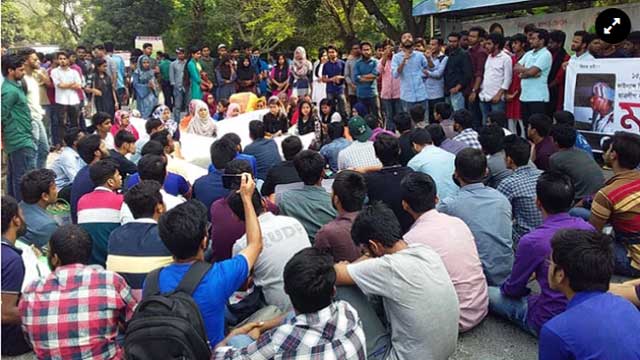 Students of Rajshahi University blocked the Dhaka-Rajshahi highway this morning hours after some Chhatra League activists of the university unit allegedly beat up one of their fellows at a dormitory.

He received 15 stiches to his head, our RU correspondent reports quoting the victim’s friends.

After the news spread, hundreds of agitating students took to the streets and blocked the highway in front of the university’s main gate around 11:00am demanding arrest of the accused and cancellation of their studentships.

They also demanded the removal of the provost of the RU’s Shaheed Shamsuzzoha Hall where the incident took place.

Asif Luck of Islamic studies department and Humayun Kabir Nahid of Bangla department took Shohrab to room no. 254 of the hall around 12:30am and beat him for half an hour, the correspondent reports quoting witnesses.

Shohrab’s friends took him to the university medical centre afterwards from where he was referred to RMCH.

Talking to the correspondent on the hospital bed, Shohrab said Asif had slapped him three days ago claiming that he stole Asif’s laptop.

“Following that incident, Asif and Nahid took me along with some of my friends to that room yesterday night. Then, they locked the room and Nahid started beating me with an iron rod,” Shohrab said.

Asif also hit Shohrab on his head with a piece of wood continuously, he alleged.

“They beat me indiscriminately all over the body, when bleeding started from my head, I cried loudly and requested them to not beat me, but they threatened to kill me if I shouted,” Shohrab added.

Shohrab’s friends who were also taken inside the room, witnessed the torture but did not dare say anything, said one of the witnesses requesting anonymity.

When contacted, BCL President Golam Kibria said, “We already visited the student at the hospital. We will take organisational action against the accused if found guilty.”

Shohrab is the son of Abdul Hamid hailed from Narsingdi.

The protesters were continuing their demonstration till 1:30 pm when the report was filed. They were also chanting slogans asking the university authorities to take responsibility of treatment of the victim.

The incident took place nearly one and a half month after Abrar, a second-year student of electrical and electronic engineering department of Buet, died as he was brutally beaten allegedly by some BCL men at its Sher-e-Bangla hall on early hours of October 7.