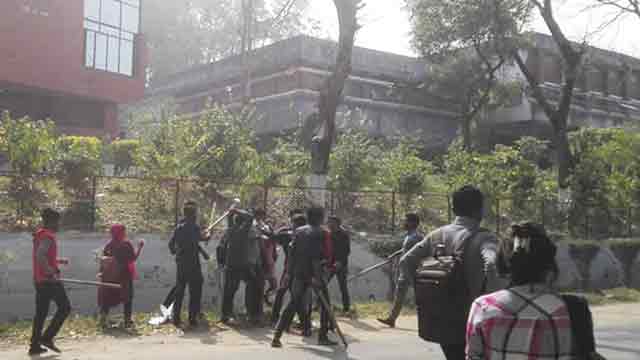 Chittagong, Jan 24 (Just News): At least 10 students were injured in an attack allegedly by Bangladesh Chhatra League activists of Chittagong University unit today when they were protesting yesterday’s BCL attack on the Dhaka University students.

The alleged BCL attackers, around 40-50 in number, swooped on a procession brought out by at least 25 students under the banner of Progotishil Chhatro Jote.

The protesters came under the attack around 1:00pm when they were crossing the central library, reports our CU correspondent from the spot.

Fazle Rabbi, a masters student of chemistry department and also the convener of the student body, was rushed to the medical centre after he was injured critically in the attack.

BCL men yesterday attacked dozens of Dhaka University students who were demonstrating in front of the vice-chancellor's office to press home a four-point demand, including expulsion of some BCL leaders for “harassing” female students a few days ago.