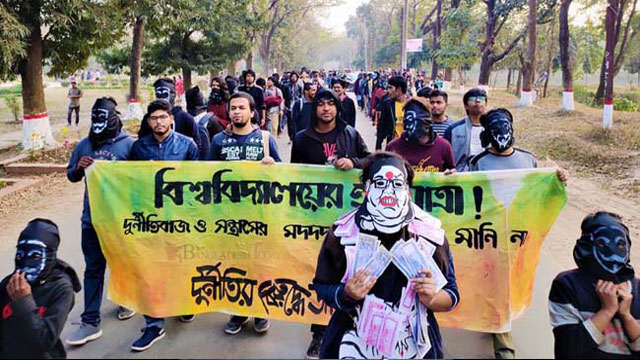 Over 50 teachers and students of Jahangirnagar University today brought out a procession on campus demanding removal of Vice Chancellor Prof Farzana Islam for her alleged involvement in corruption and irregularities.

The procession was held under the banner of “Jahangirnagar Against Corruption”. It began around 5:00pm.

Later, the students and teachers staged a demonstration in front of the VC’s residence and held a rally there.

Addressing the rally, Rakibul Rony, general secretary of JU unit Chhatra Union, said, “We are ashamed that the vice-chancellor of our university is corrupt. I condemn the government's ineptitude in this regard.”

He said the protests would continue till their demands are met.

The students and teachers of the university have been demonstrating on the campus since August 23 demanding a judicial probe into the allegations of corruption and irregularities against the VC.