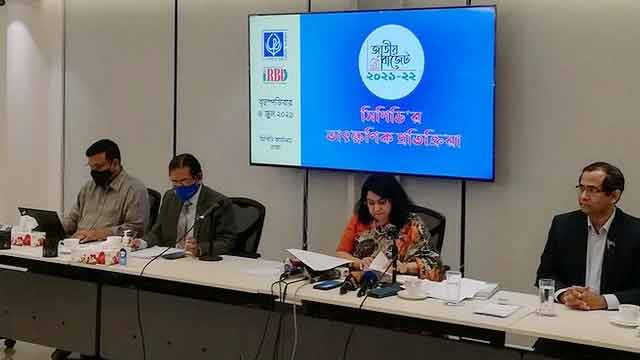 The proposed budget for the upcoming fiscal year will not be able to play its due role in offsetting the economic hardship arriving from the coronavirus pandemic, the Centre for Policy Dialogue said today.

This is not the fiscal budget to tackle the crisis stemming from the Covid-19 and it will not help recover the economy.

The independent think-tank came up with the remarks at a virtual press briefing this evening as part of its immediate reaction to the proposed budget placed in the parliament today.

The budget would have given a clear indication on how the health, education and other social sectors will get recovery in the next 3-4 years from the existing hardship, said Fahmida Khatun, executive director of the CPD.

The proposed budget has been prepared based on the poor projections and there have been limitations to implement the targets.

The government has kept aside Tk 10,000 crore to implement the vaccination programme in tackling the pandemic, but the volume is not adequate, Khatun said.

There is no change for the allocation of the health sector in the upcoming fiscal year.

For the outgoing fiscal year, the allocation is 0.83 of the gross domestic product (GDP), which may remain the same for the next one.

There is a requirement of ample allocation for the health sector given the ongoing pandemic, she said.

"We have observed that the implementation of the budgetary allocation in the health sector is the lowest this fiscal year. The government will have to reform the sector in the mid-term basis by way of keeping required allocation aside," she said.

"The government should start the reform programme in the health sector immediately and we did not see any such initiative in the last one year."

The budgetary allocation for the social safety net programme has increased a bit, she said.

But, the government has also included the pension fund for the retired government employees and the interest of the savings certificates to the SSNPs, inflating the allocation artificially.

The net allocation for the poor has not increased in a true sense.

The government has also projected a 6.1 per cent GDP growth for this fiscal year, which is high given the performance of the major economic indicators.

There is low possibility to achieve such high GDP growth and the government has set 7.2 per cent growth for the next fiscal year.

"The targeted growth is not a materialistic one and achieving the goal will not be possible," Khatun said.