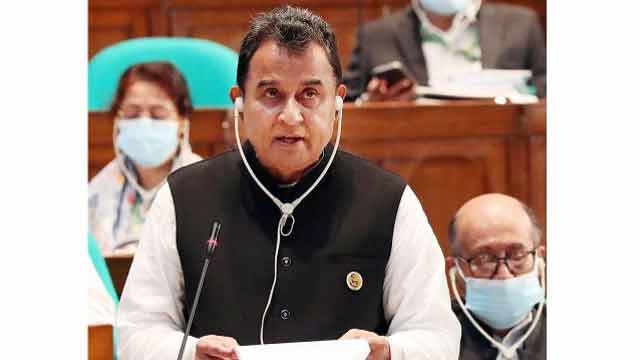 The 2021–22 national budget worth over Tk 6 lakh crore was announced on Thursday with tax and duty benefits for businesses but without any specific allocation for people who have become new poor due to the Covid outbreak.

The poverty situation has meanwhile worsened due to the pandemic after the country had reduced its poverty rate to 20.5 per cent in 2019, according to the Medium Term Macroeconomic Policy Statement 2021–22 to 2023–24.

No specific rate has been cited in the budget document of the ministry of finance for those who have turned new poor while a survey by private think-tank Power and Participation Research Centre has said that some 2.4 crore people have slipped down the poverty line in 2020.

Finance minister AHM Mustafa Kamal who announced the financial plan for the coming fiscal year in the Jatiya Sangsad said that the government introduced stimulus packages and expanded the social safety net to meet the challenges affecting the poverty eradication programme.

Economists said that there was not a single word in recognition of these new poor in the 182-page budget speech let alone any specific allocation for them.

The social safety net of the country, marred with ‘targeting error’, has been raised to Tk 1,07,614 crore in the coming fiscal year from Tk 95,574 crore in the outgoing year for the continuation of checking poverty but economists said that the programme was highly unlikely to succeed.

A roadmap with specific fund allocation and an action plan should be announced in the budget for the overwhelming poor population, he noted.

Supporting the view of Salehuddin, former World Bank Dhaka Office lead economist Zahid Hussain said that an announcement of a cash flow to the new poor after identifying them in both rural and urban areas was an imperative amid the extraordinary health crisis affecting people’s life and livelihood.

He proposed a 2.5 percentage points reduction in corporate income tax for both publicly listed and non-listed companies and concessionary facilities for the import of computer accessories and raw materials for the ICT industry to protect the domestic computer, laptop and other ICT product manufacturers.

He also proposed to increase the applicable duty on the import of some finished products in order to protect small and medium industries and provide a 1per cent exemption rate for them.

Economists apprehended that the proposals might not encourage many to utilise the facility since investment prospects mostly relied on ease of doing business and good governance.

The country’s position in the global corruption index prepared by the Transparency International is discouraging too.

The finance minister in his budget speech said that the government would continue to take strict measures in curbing corruption without elaborating the measures.

The Covid outbreak has exposed the inefficiency, mismanagement and deep-rooted corruption in the health sector, which has largely worsened for lack of monitoring and accountability for years.

The epidemic finally spurred the government to spend money on public health, but the mismanagement and incapacity to best utilise the money, while a greater portion of it got lost into the corrupt system, failed to yield expected results, according to experts.

Tk 10,000 crore, as in FY21, has been allocated in the budget to fight Covid, especially to buy Covid vaccines from China and Russia, as the national inoculation programme has been disrupted after India has slapped a ban on exports of the AstraZeneca vaccine since last March.

The finance minister proposed to keep same the revenue income target for the National Board of Revenue in the new fiscal year as in the past year while he projected higher borrowing from both internal and external sources.

Tk 1.37 lakh crore would be borrowed from local sources and over Tk 97,738 crore from foreign sources to meet the budget deficit of Tk 2.14 lakh crore, equivalent to 6.2 per cent of the country’s gross domestic product.

Former NBR chairman Mohammad Abdul Majid said that there was no problem in higher borrowing due to shortfalls in the NBR revenue in order to provide an expansionary budget during the worst-ever health crisis.

But, he said, the country’s fiscal management will come under serous stress unless the borrowed money is properly utilised to ensure good return.

Economists further said that the finance minister should also rationalise the expenditure by enhancing austerity measures.

Out of the total layout, the government will spend the highest 18.7 per cent for public administration, followed by 15.7 per cent jointly for education and technology.

The annual development programme worth Tk 2.25 lakh crore for the new financial year has already been approved.

For the new ADP, about Tk 1.37 lakh crore would come from local sources and the rest Tk 88,204 crore from foreign sources.

The finance minister has projected 7.2 per cent GDP growth and 5.3 per cent inflation rate in the coming fiscal year that will come into force from July 1.