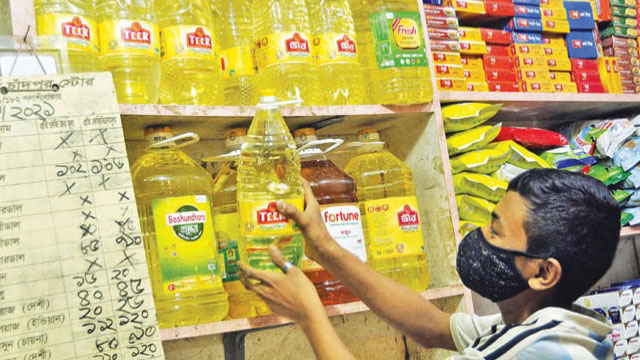 The government on Sunday approved the refiners’ proposal to increase the price of edible oil and set the price at Tk 168 a litre, up Tk 8 a litre on the previous price, though the item was selling for Tk 168-170 a litre for the last one week at the retail level.

Following a meeting with the Bangladesh Vegetable Oil Refiners and Vanaspati Manufacturers Association, commerce ministry additional secretary AHM Safiquzzaman told New Age that the price of edible oil was revised in line with the price of the commodity on the international market.

He said that the commerce ministry allowed the businesses to increase the maximum retail price of a one-litre bottle of soya bean oil to Tk 168 from Tk 160.

The price of unpackaged soya bean oil has been increased to Tk 143 a litre from Tk 136 a litre.

The price of a five-litre bottle of soya bean oil has been set at Tk 795, which was previously Tk 760 at the consumer level.

With Sunday’s revision, the government has allowed traders to increase the prices of soya bean oil and palm oil seven times since February 2021.

Unpackaged soya bean oil was sold for Tk 150-155 a litre in the city markets on Sunday and the prices were Tk 7-12 more than the prices set by the government.

Palm oil was sold for Tk 140 a litre in the city markets on the day and the price was Tk 7 more than the ministry-approved price of Tk 133 a litre.

The commerce ministry on Sunday set the price of a five-litre bottle of soya bean oil at Tk 795 but refinery companies replaced the price tag for five litres of packaged soya bean oil with Tk 800 two weeks ago.