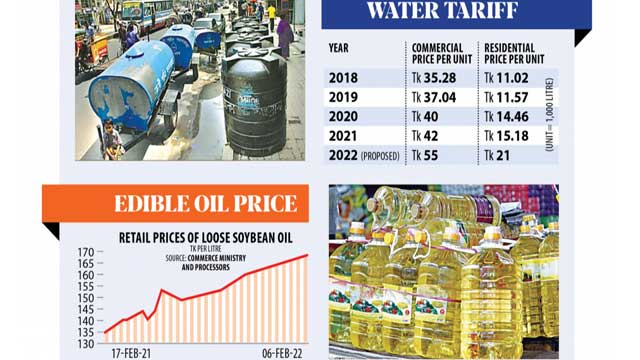 Water prices in the capital are set to see a sharp rise after Dhaka Wasa yesterday said that it wants the government to approve a "20 percent hike" in tariffs.

The potential increase in water prices is expected to add to the woes of Dhaka residents after last November's diesel and kerosene price hikes and the continued rise in edible oil prices, which according to traders may increase further ahead of Ramadan.

For all latest news, follow The Daily Star's Google News channel.
Dhaka Water Supply and Sewerage Authority (Wasa) can increase the water tariff by five percent each year in consultation with the government as per Section 22 of the Dhaka Wasa Act, 1996.

The Daily Star has obtained a copy of the proposal placed with the Wasa board.

Dhaka Wasa Managing Director Taqsem A Khan, however, told reporters yesterday that they want the government to approve at least a 20 percent hike.

"It [price hike of 5 percent as per the act] is not sufficient and that's why we want a 20 percent rise [in tariffs]. If the government wants, it can raise tariffs more than that, but we need at least a 20 percent hike."

He said the price hike may come into effect from July 1 if the LGRD ministry approves it.

The bid to hike the water tariffs is likely to further exacerbate the situation after the 23 percent increase of diesel and kerosene prices that had a knock-on effect on transportation costs and consequent spiral of price of daily essentials.

Besides, the government is mulling raising the prices of electricity, gas and fertiliser -- which could make vegetables and grains costlier -- by March to bring subsidies down.

Dhaka Wasa has increased the water tariff twice in the last two years and 15 times in the last 13 years, despite failing to fulfil its pledge of providing safe drinking water to the vast majority of the capital's over two crore residents.

Wasa MD Taqsem said currently Wasa spends Tk 25 to produce one unit of water and sells it for Tk 15.

He said they have been running many projects with foreign loans and need to pay a lot of money as repayment and as interest on the loans.

Plus, there was an instruction from the government high-ups to reduce the subsidy on water gradually, keeping water prices at tolerable levels, he said.

Contacted, Adil Mohammad Khan, former general secretary of Bangladesh Institute of Planners, said, "The price hike of water will put additional burden on the residents of Dhaka city, especially on the poor and lower middle-income people who are already over-burdened during this pandemic amid the price hike of essentials."

He said while many residents are not getting the benefit of the projects, they have to pay the additional money due to the project's cost. The government should look into the necessity of those projects.

Last Monday, the government increased per litre price of loose soybean oil by Tk 8. The daily essential now costs Tk 168 per litre in the retail market.

The government also fixed the price of five-litre bottles of soybean oil at Tk 795 and loose soybean at Tk 143 per litre.

They said the demand of edible oil increases from 1.5 lakh tonne to two lakh tonne a month during Ramadan.

"But due to the coronavirus pandemic production of oil has been reduced by 20 to 30 percent."

Biswajit Saha, director of City Group, said the import cost before the pandemic of each tonne of soybean oil was $650 and palm oil was $700 dollars.

"But the price of soybean has risen to $1500 and palm oil to $1470 respectively," he said. To rein in the price, he suggested the government temporarily withdraw 15 percent VAT at import level.

"The VAT withdrawal will help reduce the price by at least Tk 20 at retail level."-The Daily Star