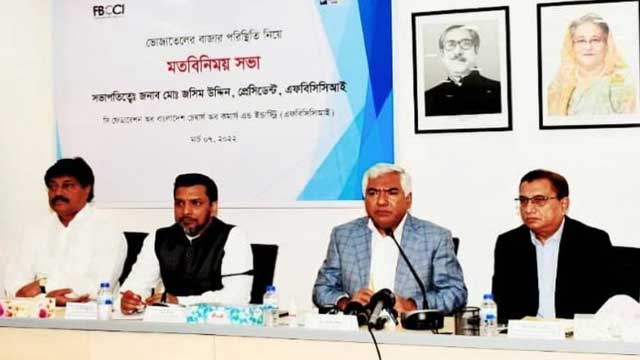 Federation of Bangladesh Chambers of Commerce and Industries on Monday urged the government to remove value-added tax on imported edible oil for next three months to bring stability in the edible oil market.

FBCCI president Md Jashim Uddin made the call at the meeting with the importers, millers, refiners, wholesalers and leaders of different market committees to discuss the market situation of edible oil at its office.

He said that India had adjusted VAT and duty on edible oil three times and Bangladesh should also go for the adjustment to bring back normalcy in the cooking oil market.

‘The government should introduce bond on import of edible oil to stop the manipulation of the prices of the widely consumed soybean oil,’ he said.

Jashim said that a handful of dishonest businessmen had been selling the oil at higher prices than the price fixed by the government.

To prevent this practice, FBCCI will form a market monitoring cell, he announced.

He also urged the market committee to actively monitor the market.

According to him the edible oil should not be sold in loose form.

Earlier in the meeting, Taslim Shahriar, senior assistant general manager from Meghna group informed that, in the last one year, the price of the edible oil increased by 61 per cent in the global market, whereas, in Bangladesh the rate is 21 per cent.

City Group director Biswajit Saha claimed that there is no supply shortage from millers. The city group supplies two and a half thousand tonnes oil daily, he informed.

To control the skyrocketing of the price of the edible oil, Kazi Salahuddin Ahammad, senior general manager of S Alam Group demanded VAT withdrawal on the edible oil.

Echoing the same demand, TK group director Shafiul Taslim said, the government earns Tk 25 to 27 as revenue from per liter soya bean oil. The revenue relief will end the crisis till Ramadan, he added.