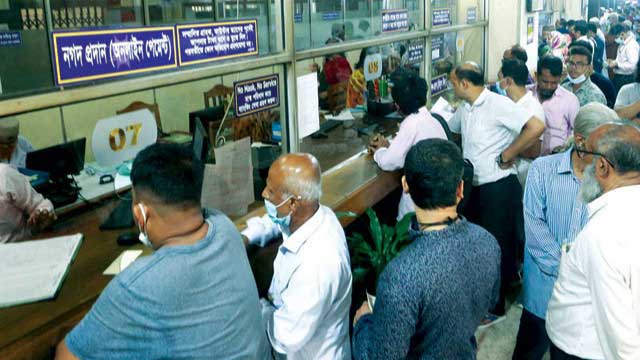 Bangladesh Bank once again devaluated the taka against the US dollar, raising the exchange value of the dollar by 40 paisa to Tk 88 a US dollar.

Earlier on 16 May, the central raised the exchange value of dollar by 80 paisa to Tk 87.50 a US dollar, followed by another raise by 10 paisa.

The latest depreciation of taka will benefit both exporters and expatriates but importers’ cost will go up.

On Monday, many banks collected remittance and encash export bills at a rate of Tk 100 a dollar, compelling importers to purchase dollars at a higher rate.

Bangladesh Bank is selling dollars continuously from its reserve, and raising the price gradually due to demand of dollars, thus trying to control the market. Economists, however, are in favour of leaving the dollar price to demand and supply.

Prices of food items, raw materials and oil have increased in the international market. The shipping costs have also gone up. As a result, import costs have increased by almost 44 per cent. This is mounting pressure on the foreign exchange reserve.

Exports have not increased in the manner that imports have. On the contrary, remittance has dropped. As a result, the deficit is widening every month. So the dollar is being sold from the reserve to meet the import costs.

Imports of five and a half months can be met with the current reserve. The reserve will decrease further if the import cost keeps increasing in this way. On the contrary, there is a pressure from the International Monetary Fund to properly maintain the accounts of reserve.

In compliance of IMF guidelines, export development fund, loan of government project and loan provided to Sri Lanka and deposit to Sonali Bank have to be deducted from the reserve. So the reserve will decrease by over 7 billion (700 crore) dollars. Now the current reserve is 42 billon (4,200 crore) US dollars.

Bankers said the inward remittance was good due to Eid. The way the cost of imports has increased, the cost could not be met with the export earnings. So volatility is prevailing in the financial market over dollar. There is no sign of this crisis disappearing.

This crisis is mounting pressure on the reserves. Simultaneously, the crisis of cash has surfaced. As Bangladesh Bank is collecting taka by selling dollars.