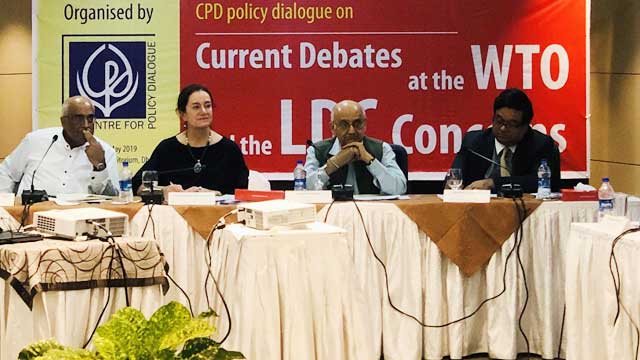 Bangladesh needs to diversify its export base further and look for strategies to ensure that its exports are not disrupted for the loss of trade preferences due to the graduation process from the group of LDCs.

Monique van Daalen, chairperson of WTO Sub-Committee on LDC, made the suggestions while addressing a seminar on “Current Debates at TWO and the LDC Concern” organised by Centre for Policy Dialogue (CPD) at Brac Centre Inn in the city on Monday.

Daalen, also Netherlands’ Ambassador and Permanent Representative to World Trade Organization (WTO) in Geneva, said despite an upward trend in LDC trade in the last two years, further efforts are needed to strengthen manufacturing capacity and enhance the market access.

Daalen said Bangladesh needs to take preparations to negotiate efficiently with its trade partners. “You’ll have to come up with your own narrative to negotiate on the global stage,” she added.

Prof Rehman Sobhan said China and the USA have been confronting each other on the global trade arena like two elephants which should be taken into account while devising strategies for Bangladesh’s graduation from the group of least developed countries (LCDs) to a developing country.

He said Bangladesh should negotiate multilaterally and bilaterally against its trade partners to derive the trade benefits as it envisions for graduating from the group of LDCs.

Yusuf Abdullah Haroon said Bangladesh should concentrate on capacity-building and attracting more investment although the reality is that only 2 percent of GDP is spent on education.

In the open discussion, speakers said trade-related issues of LDCs are always kept in the discussion instead of any negotiation.

They said there is no effective mechanism to protect the interests of the LDCs in the trade-related negotiations.