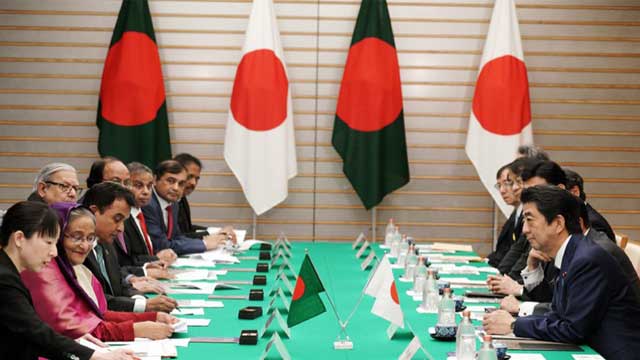 Bangladesh and Japan on Wednesday signed their 40th ODA deal involving US$ 2.5 billion for implementing four projects to bolster ties between the two countries.

Prime Minister Sheikh Hasina and her Japanese counterpart Shinzo Abe witnessed the signing at his office.

Sheikh Hasina was given guard of honour when she reached the Japanese Prime Minister’s Office.

She also sought cooperation in extracting gas hydrate from seabed.

Both the Prime Ministers promised to work together against terrorism and violent extremism, both at the national and international levels.

Sheikh Hasina urged the Japanese Prime Minister to take skilled manpower from Bangladesh as they introduced a new immigration law.

She proposed opening a skill development institute in Bangladesh and taking trained manpower from Bangladesh.

Abe responded very positively in this regard and said officials of the two counties will talk over the matter and decide, said the Foreign Secretary.

Hasina invited her Japanese counterpart to attend the “Mujib Borsho” to be celebrated in 2020 and Abe accepted the invitation saying he will consider positively.

Japan will contest the UN Security Council election which will be held 2022, and Bangladesh will help it in this regard.

Japan also extended its support to Bangladesh candidate for the post of Deputy Director General, International Organization for Migration (IOM).