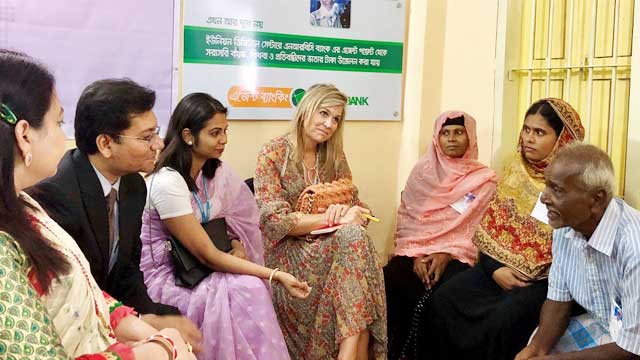 “Financial inclusion has increased from 31 percent in 2014 to 50 percent in 2017 and so this is actually very exciting,” said Queen Maxima mentioning that she is excited with Bangladesh’s progress during the two and half years from her last visit.

The visiting Dutch Queen made the remarks at a views-exchange meeting with development partners and financial technology (Fintech) sector, organised and hosted by the United Nations Development Programme (UNDP) at the UN offices in the city.

She said: “This is primarily has happened through mobile financial services, so basic technology has played a very important role. Just to give an idea, it went from 2.7 percent in 2014 to 21 percent in 2017.”

“So of course, given the high-density population of Bangladesh, it’s actually very good because with that amount of people, all the distance you need to move to actually have any access is a lot higher than other countries,” said the Dutch Queen.

However, Maxima also pointed out a number of issues that are holding Bangladesh back in terms of full financial inclusion, or financial inclusion that ‘affects’ all of the Sustainable Development Goals, with gender disparity on top of the list.

“Sixty-five percent of Bangladeshi men have accounts, compared to only 36 percent of women. Bangladesh’s gender gap in financial access grew a staggering 20 percentage points from 2014 to 2017,” she added.

Earlier Sudipto Mukerjee, Resident Representative of UNDP, welcomed the Queen and thanked her for visiting Bangladesh twice as the UN Secretary-General’s Special Advocate for Inclusive Finance for Development.

Representatives of the Fintech stakeholders and development partners pointed out their observations, suggestions and areas of development to increase financial inclusion and lower inequalities to aid Bangladesh in its progress towards achieving the Sustainable Development Goals.

Sudipto urged all to finalise and implement the people-centric National Financial Inclusion Strategy soon, to reduce the inequality and fight poverty.

Following the roundtable, the Queen met the beneficiaries of UNDP’s Strengthening Women’s Ability for Productive New Opportunities (SWAPNO), which is a social transfer project for ultra-poor women to be engaged in public works essential for the economic and social life for rural communities.

One of Swapno’s key agenda is financial inclusion so that the beneficiaries – ultra poor women who were widowed, divorced, abandoned or left with a disabled husband – can reap the benefits of financial services to make their lives and that of their children more secure.

In a pilot initiative of the project, more than 2,700 beneficiaries got access to bank accounts and more than Tk 120 million in wages have been disbursed. Around 1,000 women were given financial literacy training.

Afterwards, the queen visited UNDP’s Access to Information Programme (a2i)’s union digital centre at the union parishad office of Narsingdi’s Zinardi Union and learnt of how it provides services to the people specially women through its digital centre.

The union digital centres have revolutionised financial inclusion in Bangladesh by bringing banking services to the people at the union level.

Queen Maxima, who was appointed UNSGSA in 2009, visited Bangladesh in her capacity as UNSGSA in November 2015.

In her capacity, she advises the UN Secretary-General and works worldwide to make safe and affordable financial services available to all, including low-income groups and small and medium-sized enterprises.

She has been honorary patron of the G20 Global Partnership for Financial Inclusion (GPFI) since 2011.