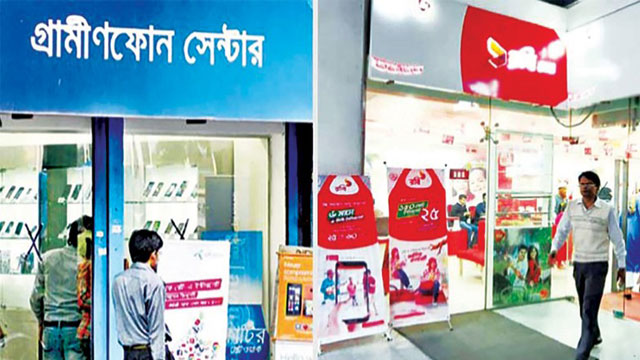 The Bangladesh Telecommunication Regulatory Commission on Thursday issued two separate show-cause notices to Grameenphone and Robi, asking the mobile operators to explain why their 2G and 3G licences would not be revoked for non-payment of audit claims worth Tk 13,446.95 crore.

The notices were issued under the section 46 of the Bangladesh Telecommunication Regulatory Act 2001, he said.

The Section 46 of the Act empowers the BTRC to suspend and cancel licences of any of its licensee on logical ground.

The BTRC in its letters mentioned that the operators had violated licensing conditions and regulations by refraining from paying the audit claims, a senior official of the commission said.

If the commission finds the explanations to be given by the operators improper, it might suspend or cancel the 2G and 3G licences of the operators.

The operators, however, would be able to operate 4G services to its customers even if the 2G and 3G licences were cancelled.

The two operators — GP and Robi — hold more than 75 per cent of the market share in the country’s telecom market of 16.18 crore subscribers.

In July, 2018, the commission issued a demand letter to Robi claiming Tk 867 crore in dues based on an audit report on the entity’s information system.

Although the operators were asked to pay the money in two weeks, they are yet to clear the money raising question over the audit findings.

Instead of paying money, the operators proposed discussions with the regulator for resolving the issue.

Asked about the mobile operators’ proposals, BTRC chairman Md Jahurul Haque told New Age on Tuesday that the commission would sit with the operators over the audit claims if they deposited at least 10 per cent of the audit claims.

‘Our demands to the operators were placed based on independent audits and the demands are not baseless,’ he said, adding that the operators should pay at least some portion of the audit claims before engaging in any further discussion with the BTRC.

‘Unless the operators agree to do so, the commission would follow due course of action to realise the government claims,’ the BTRC chairman said.

In a statement, Robi Axiata chief corporate and regulatory officer Shahed Alam said, ‘Issuing show-cause notice over licence cancellation will create an adverse reaction among the investors and uncertainty will be loomed among subscribers.’

‘We will send reply to the notice in due course,’ he said.

A statement of GP issued on Thursday said, ‘This notice is unjustified and yet another step by the regulator to refuse our invitation to seek an amicable solution related to a “disputed audit claim”.’

‘Grameenphone will assess the notice before considering its response,’ it said, adding, ‘We will take necessary measures to protect the rights of the company, our shareholders and customers against unwarranted actions by the regulator.’

Earlier, the GP announced that it would follow the Arbitration Act 2001 to solve the ‘disputed audit claim’.

The commission, however, rejected the plea made by the operators, saying there was no such scope in the telecom act.

On July 4 this year, the BTRC reduced internet bandwidth capacity of GP by 30 per cent and Robi by 15 per cent over the unpaid audit claims but restored the capacity on July 17 considering the sufferings of the customers.

Later, the commission halted issuance of no objection certificates to the mobile operators and auto-renewal facility for their voice and data packages.