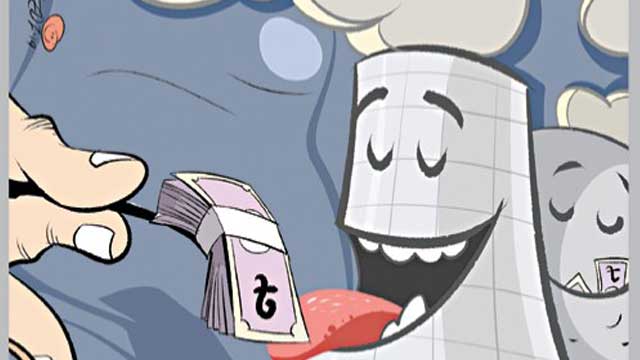 In the last 10 years Bangladesh saw the establishment of a power plant almost every month, mostly private, with the country’s capacity to generate electricity becoming far greater than the demand by now.

But except for peak hours between 7:00pm and 11:00pm, the daily demand for electricity remains around 9,000 MW during the summer. In the peak hours the power demand rises to around 12,000 MW, according to officials at the Power Development Board.

A close look at the reports on daily power generation posted on its website by the state-owned PDB reveals that many power plants sit idle daily because of lower demand.

Although a comprehensive account of the power plants sitting idle is not available from the PDB, the state-owned company spends roughly 40 per cent of its expenditure in the sector as capacity payment.

Capacity payment is the amount of money that the government is to pay to the power plants sitting idle because of no electricity demand.

The cash-strapped PDB, running on an about Tk 8,000 crore deficit, has been paying substantial sums as capacity payment every year since 2012, PDB officials say.

‘The power sector is in a great distress,’ energy adviser to the Consumers Association of Bangladesh M Shamsul Alam told New Age on Monday .

Shamsul pointed out that though the country’s power generation capacity maintained an annual 12 per cent growth over the five years until last year, the growth of power generation over the period remained about 6 per cent a year.

‘Half the increased capacity remains unused inflating the public expenditure for the power sector,’ he noted.

‘The country is on a wrong path to develop its power sector,’ he observed.

Still, another 32 private and 16 public power plants are under implementation at the moment, according to the PDB.

A total of 17 big power plants planned by the government through public financing are all in the planning stage and some of them are scheduled to begin their operations as late as 2030, or even later.

Shamsul Alam said that 60 per cent of the power plants installed in the country were peakers, small power plants operating only in peak hours to meet high electricity demand.

An understanding of the power generation technology together with efficient and balanced management of peakers and base load power plants is necessary for building a sustainable power sector, he said, adding, ‘too many peakers can be bad for the power sector.’

Amidst such a generation over-capacity, power interruptions are still very common across Bangladesh, including in the capital, and consumers often complain about voltage fluctuations.

‘And power gets even costlier at the hand of businessmen,’ he said.

He suggested that use of an energy mix could keep the power price relatively low but private power plants avoided using such fuels for maximising their profit.

‘Private power plants need strict government regulation which apparently is absent in the country,’ he pointed out.

About 50 of the 80 private power plants built since 2009 are either completely dependent on oil or diesel as fuel. The rest are powered by gas.

Most of these power plants were contracted out without bidding in complete violation of government policies and plans.

They also spoke against increasing the number of gas-based power plants.

On the other hand, gas-fired power plants are not considered viable for Bangladesh on account of saving gas reserves.

Coal-based power plants, too, have their drawbacks but policymakers found them viable compared to other options available.

Anu Muhammad, economist and member-secretary of the National Committee to Protect Oil, Gas, Mineral Resources, Power and Ports, told New Age on Monday that the way the power sector was expanding had nothing to do with meeting people’s demand for power.

‘The government is awarding power plant contracts either for financial gains or political benefits,’ he said.

He said that the government often invoking the indemnity law while contracting out power plants without bidding aptly proved his allegation.

‘The government is either creating the opportunity for businessmen in exchange of money or trying to please countries like India, Russia and China to gain political favour,’ he said.

the first day of September, the PDB finalised yet another deal to purchase 718 MW electricity for 22 years without bidding from the Reliance Bangladesh LNG and Power Limited, a sister concern of India’s Reliance Group.

Experts warned that the government would have to pay the Reliance Bangladesh a staggering $1.76 billion extra because of awarding the deal without bidding.

PDB chairman Khaled Mahmood, however, offered that many power plants needed to be established to stir confidence in businessmen about the government’s intention to boost industrialisation.

‘We have been successful in sending through the message,’ said Khaled on Monday.

He, however, admitted that their actions had garnered little response from industries who continued to rely largely on captive power.

‘And no new contract demanding capacity payment would be entertained,’ said Khaled.

At present 94 per cent of the country’s 160 million population are under electricity coverage as per government statistics while many complained of power cuts mainly due to inadequate distribution and transmission capacities.

Experts rather recommended increasing investments in order to improve the distribution and transmission capacities for an uninterrupted supply of power to the consumers.-New Age