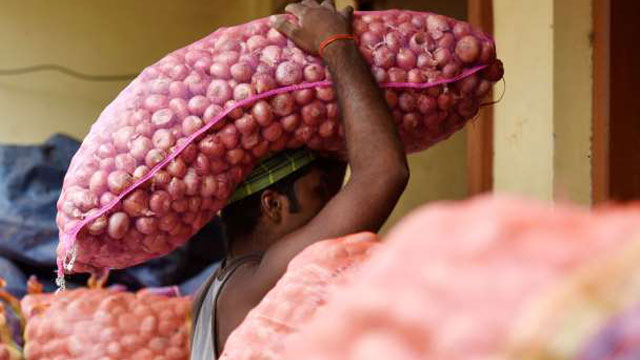 India today announced a ban on export of onions with immediate effect and a slew of other steps to help improve availability of the kitchen staple and contain its soaring price in domestic markets.

“In view of sustained high price of onions in the market, the Central Government today took several steps to contain the prices namely, imposition of stock limits on traders, ban on exports and has asked state governments to take strict measures to prevent hoarding by traders including organizing raids,” the Ministry of Consumer Affairs, Food and Public Distribution said in a statement.

The Indian government “has banned export of onions with immediate effect till further orders for improving domestic availability,” said the statement.

The reported export of onion below Minimum Export Price to Bangladesh and Sri Lanka will be immediately stopped and strict action initiated against those who are found to be violating this decision of the central government, the statement said.

It said a stock limits on onion by traders was also imposed to facilitate release of onions in the domestic market and prevention of hoarding by traders.

While the stock limit for retail traders is 100 quintals, it is 500 quintals for wholesale traders across the country, our New Delhi correspondent reports quoting the statement.

A central buffer of about 56,700 tonnes was built by the government through cooperative agency National Agricultural Cooperative Marketing Federation of India Ltd during the rabi crop season and this buffer is being utilized for supplies to Delhi at a rate of not more than 23.90 per kg. Haryana and Andhra Pradesh are also being supplied from the buffer.