Onion price shoots up by 71% in a day 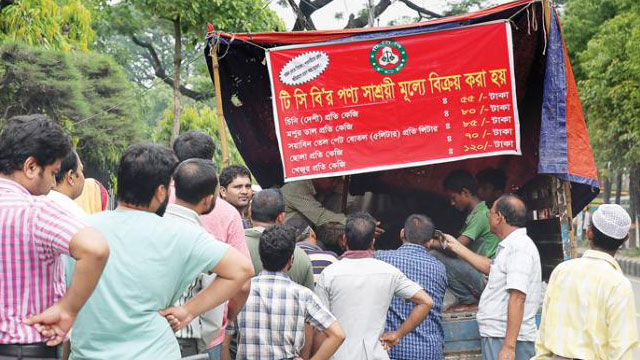 Onion price at the retail markets in Bangladesh went up to around 71 per cent per kg within a day, the highest level in last several years, as the wholesalers reportedly jacked up the price following India’s ban on the ingredient export.

Onion price at the kitchen markets in Dhaka rose to Tk 110 to Tk 120 a kilogramme today, which is Tk 40 to Tk 50 up from yesterday.

Al Amin, a private job holder, while purchasing onion from a retail shop at Shukrabad Kitchen Market this morning, said, “Now, I have to buy one kg locally grown onion at Tk 115, which was Tk 70 a day back.”

Md Sultan Islam, a retailer of the kitchen market, said they were selling both the Indian and locally grown onion at the same price.

“We bought Indian and locally grown onion at Tk 90 to Tk 95 per kg respectively from Mohammadpur wholesale Krishi Market,” he said.

“It is the highest level of price in the last several years,” the trader said.

A retailer in Mohammadpur kitchen market, seeking anonymity, alleged that the wholesalers have jacked up the price in the wake of India’s ban on onion export.

“There is no short supply of the variety in the wholesale markets right now,” claimed the retailer, who was buying 80 kilogrammes of onion from the Krishi Market this morning.

The price of onion rose due to India’s export ban, said Md Milon Sheikh, a wholesaler in Krishi Market. He, however, said there is no supply fall in the markets right now.

Shuvo Rahman, a consumer who is also a postgraduate student of Jagannath University, said the skyrocketing price of this necessary ingredient went to an unbearable level for the middle-class consumers.

“It is unacceptable indeed,” he added.

Echoing voices with the consumers, Golam Rahman, president of Consumers Association of Bangladesh, told The Daily Star that there is no logical ground behind increasing the onion price.

“As far as I know, it is the highest level of price,” he said adding that a group of dishonest wholesalers have hiked the onion price for making extra profit in the name of India’s ban.