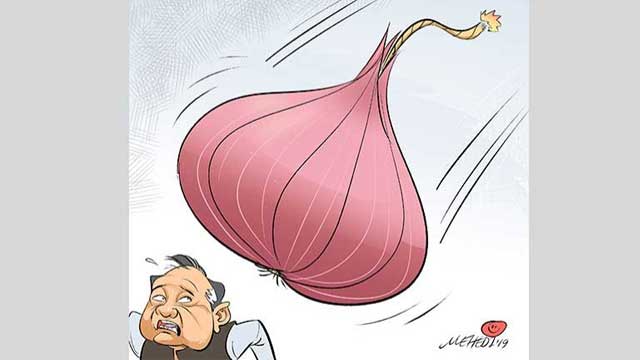 The price of onion shot up to Tk 150 a kilogram in the capital’s kitchen markets on Thursday as the daily necessity’s price had continued to climb every day.

The item’s price went up by Tk 20 a kilogram in the previous two days despite an appeal on Monday to the consumers from the commerce ministry not to worry about the price of the item.

On Thursday, a kilogram of local-variety onion was retailing for Tk 145-150 and those imported from Myanmar for Tk 130-140 a kilogram in the city’s kitchen markets.

Commerce minister Tipu Munshi on Thursday, however, said that India put Bangladesh in a difficult situation by halting export of onion.

He also blamed some dishonest traders for the price hike of the essential item in recent time.

‘We are importing onion from Myanmar but the price in the local market is not coming down as the import cost stands at Tk 75 a kilogram,’ the minister told reporters after the inauguration of Leather Tech Expo-2019 at the International Convention Centre at Bashundhara in the capital.

Retailers said that onion price was rising daily in the wholesale market and they were, therefore, forced to sell the item at high prices.

Narayan Chandra Saha, a wholesaler at capital’s Shyambazar wholesale market, said that onions imported from India almost disappeared from the market and the quantity of the item imported from Myanmar was not sufficient.

He said that the local variety of the item was selling for Tk 120-125 a kilogram while those imported from Myanmar were selling for Tk 110-112 on Thursday in the wholesale market.

Narayan viewed that so long the Indian ban on onion export remained the price of the commodity would not fall in Bangladesh.

He hoped that India would re-allow onion export soon as the country’s traders were putting pressure on their government.

While the price of local onion hit Tk 150 a kilogram on Thursday the data provided by state-owned Trading Corporation of Bangladesh showed that it was retailing for Tk 125-130 a kilogram and the imported variety for Tk 120-125.

The price of onion started rising in Bangladesh after India on September 13 set the minimum export price of the item at $850 a tonne.

The price of the commodity increased by Tk 15-20 to Tk 55-65 a kilogram in Bangladesh on September 14, the next day, depending on the variety.

On September 29 when India imposed a ban on onion export the price hit Tk 120 a kilogram the following day, on September 30, in Dhaka’s kitchen markets.

The price came down to Tk 70-90 a kilogram in the second week of October as traders started importing the item from Myanmar and Egypt.

In the third week of October, the price started rising again.