1kg of onion, or a broiler chicken? 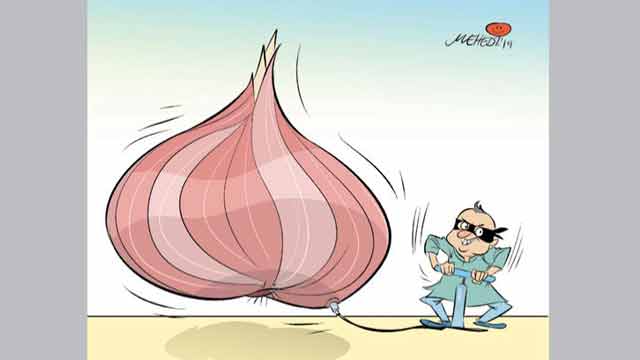 Kitchen bags continue to feel heavier for consumers with the continued rise of onion prices for over a month, making a 200% hike during the period.

The prices of the essential cooking ingredient have already broken previous records. In September, both Indian and local onions were sold at the price of about Tk50 per kilogram, but it jumped to Tk140, and Tk150 per kg respectively in Dhaka just Friday, this despite the government's measures to pull the reins on price hike.

As of Friday, customers arehaving to pay Tk150 to buy a kg of onion, while the price for broiler chicken is also Tk150 per kg.

The price of the essential cooking ingredient started to rise since mid September because of shortage in India, a major exporting country. India, on September 29 slapped a ban on onion exports effective till further order, to maintain domestic availability.

As Bangladesh was heavily dependent on India for onion imports, the local prices of the deciduous crop skyrocketed since then, due to the shortage in supply.

Profit-mongering traders increased the prices of both varieties of onion taking advantage of lax monitoring by the government, on Friday, the price went up to a record high for this year amid government promises, and measures to keep them down.

During a visit to different markets and superstores in the capital, Dhaka Tribune correspondents found Myanmar onions were selling for Tk130 per kg, Indian ones at Tk140, and local ones for Tk150.

At the wholesale market in Kawran Bazar, the price was Tk120 per kg for Indian ones while Tk130 for local ones, and Tk110 for the Myanmar variety, said traders.

Md Jahid, a wholesaler of Kawran Bazar said no onion coming from India is the core reason behind the price hike.

On October 2, the wholesale prices of local, and imported onions ranged between Tk60 and Tk70 a kg.

On October 15, onions imported from Myanmar sold between Tk70 and Tk75 a kg, and Indian onion at Tk80-85 kg at Khatunganj wholesale market.

Attributing the surging prices to the supply shortage, the wholesalers at Khatunganj market, the largest commodity hub of the country, hoped that the onion prices might come down with the arrival of big consignments.

“The supply against the demand is not adequate. The onion market will cool down with the entry of huge consignments. It will be brought within the purchasing capacity of ordinary people in December when new onion crop will hit the market,” said the wholesaler of Khatunganj.

The price, however, was a bit higher at the superstores in Dhaka.

Assistant sales manager SM Kibria at Swapno's Banasree outlet said they sold the onion at Tk120-Tk140 on Thursday, but the management asked them to put new price tag of Tk155 for local onions at their outlets.

Although, the Trading Corporation of Bangladesh (TCB) started open market sale of onion across the country on September 30 at a subsidized rate of Tk45 per kg, it had failed to make any significant impact because of huge demand compared to the supplies.

The price of onion was about Tk50 in mid September, and jumped to Tk75 to 80 a kg by the last week of the month. As India slapped a ban, the price of local onion on the following day jumped to Tk110 to Tk120, while Indian onion price stood at Tk100 to Tk110.

The price came down to Tk 70-90 a kilogram in the second week of October as traders started importing the item from Myanmar and Egypt, but it started rising again from the third week of October.

Narayan Chandra Saha, a wholesaler at capital’s Shyambazar wholesale market, said that onions imported from India almost disappeared from the market, but the price of Burmese ones came down slightly on Friday.

“The import from Myanmar is ongoing, but not sufficient. The Burmese onions were on sale at Tk110-Tk115 on Thursday, but dropped to Tk105-Tk106 on Friday,” he said.

The wholesaler expected that the price may come down a little bit once the products from Egypt arrives in the market.

The wholesaler said the skyrocketing price has also brought a change in the buying behaviour of retailers as they are buying less than usual, expecting that the price will fall further.

There is a demand of 2400,000 tons of onions each year, while the country can produce about 23lakh tons but a major portion of it gets damaged. Bangladesh imports 700,000-800,000 lakh tons of onions every year to meet the domestic demand.