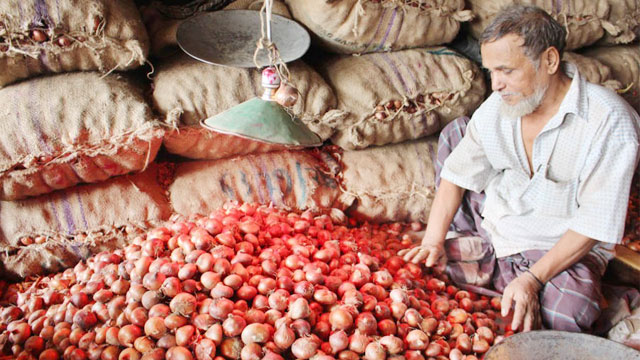 Onion prices at the kitchen markets in Dhaka city hit a record high today, failing the government’s all mechanisms to cool down the overheated onion market.

Yesterday, onions were actually being sold for as high as Tk 220 a kg in retail markets.

Prices of onions were Tk 50 for a kg but within the span of two months the price touched at Tk 240 to 250 for a kg which is a record high for this year.

However, the onion price at the Karwan Bazar wholesale market was a little cheaper as the local onion was being sold at Tk 220 to 230 per kg while the onion exported from Egypt at Tk 160 to 180 per kg and Myanmar one at Tk 190-200 per kg, according to several traders of the market.

Moniruzzman Kazal, owner of Janani Departmental Store at West Kazipara, said he stopped selling of the onion sensing possible loss due to the skyrocketing prices of the essential.

“I have been selling all cooking items including onions for the last 30 years. I have never experienced such price hike of onions...So I stopped storing and selling of onion”, he added.

According to the traders, prices of Indian onion started going up since the third week of September due to a short supply.

In September, India announced a ban on export of onion with immediate effect, after extended Monsoon downpour delayed harvest and supplies shrivelled.

Last month, Dipankar Ghosh, Clearing and Forwarding Agents of Bhomra land port, said onion prices jumped in Indian wholesale markets since the third week of September, resulting in a hike in the import cost in Bangladesh.

The price restriction heated up the onion market in Bangladesh as the country meets a portion of its annual demand through import because of inadequate domestic production.

Yesterday, terming the crisis artificial, senior treasury and opposition bench lawmakers came down heavily on the government in parliament for failing to check skyrocketing onion prices.

They said people were suffering and the government’s failure to bring down the prices of the daily essential would trigger negative reaction from the people.

The MPs, taking the floor on points of order, said there was “no shortage” of onions in the market and the crisis was artificially created.