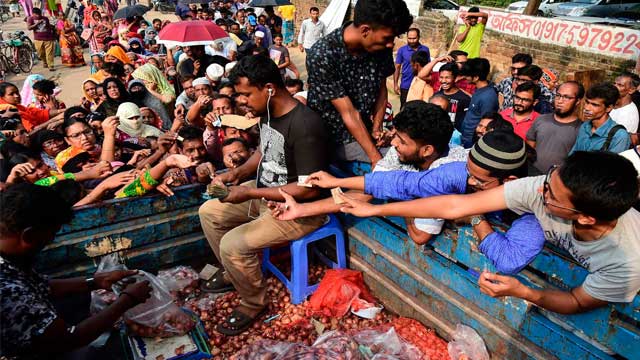 The onion price remained unchanged at Tk 180-200 per kg at the retail market in the capital on Monday although it fell by Tk 30-40 at the wholesale market compared to Sunday’s one.

Traders hiked the price of the bulb citing a supply crunch following drizzles in many parts of the country for a few days since Thursday.

Visiting several markets of the capital on Monday, this correspondent found that locally-grown new onion was selling at Tk 100-130 per kg while the imported one at Tk 60-70 a kg at the wholesale market against Sunday’s Tk 130-160 and 90-120 respectively.

On the contrary, the local variety of the essential kitchen item was selling at Tk 180-200 per kg and the imported one at Tk 100-120 a kg at the retail market respectively.

According to the data of state-run Trading Corporation of Bangladesh (TCB), locally–grown new onion was selling at Tk 140-160 a kg on Monday which was Tk 180-200 on Sunday. Besides, the imported bulb was selling at Tk 70-110 against Sunday’s Tk 130 a kg.

The price came down as low as Tk 100 and Tk 50 for the two varieties respectively after the local bulb and imported one hit the market.

But it started soaring again after light rain hit the country from Thursday and reached Tk 200 a kg.

Manik Saha, a stokist at Shyambazar, told UNB that they sold locally-grown new onion at Tk 100-130 per kg while the Burmese one at Tk 130, Chinese variety at Tk 60, Turkish and Egyptian ones at Tk 70 per kg on Monday.

He said the price came down by Tk 30-40 compared to Sunday’s one following adequate supply in the market. “The onion price went up due to the rain and bad weather. However, it started to fall at the wholesale market,” he added.

Mentioning that new onions are hitting the market in large volume, he said the price might not see further hike in near future.

Arifur Rahman, a shopkeeper at Bangshal, said they were selling local onion at Tk 180-200 per kg while the imported one at Tk 80-100.

“We’re retailers and so our sales price depends on the wholesale market. If we can buy onion at a lower price, we can sell it at a lower price, too. Stokists and wholesalers hike the price when there’s no enough onion in the market,” he added.

Venting her anger, Rabia Khatun, a resident of Shantinagar, said the market of essentials is out of government’s control for lack of monitoring. “Common people have to suffer for a section of unscrupulous businessmen who want to make quick buck cashing in on any crisis,” she said, adding that she bought one kg imported onion for Tk 80.