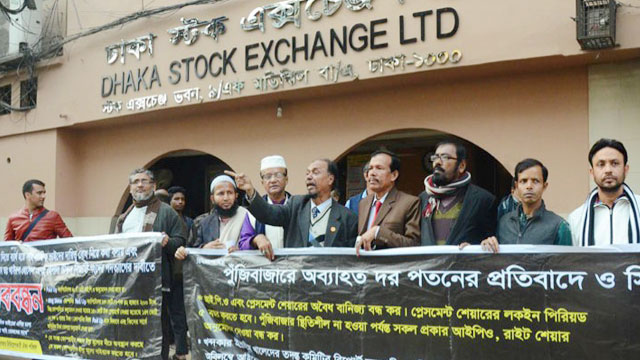 Dhaka stocks’ meltdown continued on Tuesday as panicked investors kept frantic selling in the worst spell of market fall after the 2010-2011 market crash.

The market has been in turmoil for 11 months causing the DSEX to fall by 1,914 points and the DSE market capitalisation to slump by more than Tk 1.06 lakh crore.

The market went into free fall from the beginning of the day that continued until the end of the session as panicked investors rushed for exit to avoid pitfalls, market operators said.

The sales mounted on the day as there was no visible move from any quarter to check the plunge and instil confidence in the market.

The market collapsed as investors’ confidence grounded amid a prolonged bearish vibe in the market, the government’s apathy towards the capital market, depressing macroeconomic data, pressure on the financial sector and Grameenphone’s tussle with the regulator.

The current precarious situation was rooted in the rise of wrongdoings in the market, falsification of financial statements, approval of initial public offerings by weak companies with huge placement shares, unpredictable regulations and no product diversification.

The market was going through a worsening situation after the debacle in 2010-11 as a large number of ill-fated small investors lost almost the whole of their investment.

The country under the Awami Leage rule has experienced two major stock market crashes—one in 1996 and the other in 2010. There was a big bubble followed by a catastrophic crash in 1996.

A number of affected investors on Tuesday staged a demonstration in front of the Motijheel DSE office against the relentless fall in the market. They demanded the resignation of the BSEC chairman M Khairul Hossain and fixing of the market immediately.

Share market analyst and United International University professor Mohammad Musa told New Age that the plunge could be termed as a market crash in terms of the index erosion.

The government, he said, is puzzled by the slump and does not know where the market is headed to and what to do.

The plunge would accelerate if the government does not intervene for a ‘long time’, he further said.

Market operators said that it was a frustrating experience for both local and foreign investors as they never observed such a protracted downward trend before.

They said that the DSE’s dispute over selecting its managing director also hit investors’ confidence.

The Bangladesh Securities and Exchange Commission has chosen fundamentally weak companies for listing in the capital market over the last two years, he observed.

The government must drastically reshuffle the current commission in order to effect reforms to improve the market, he suggested.

The market went into a free fall after the government fixed April 1 for the banks to implement 9 per cent lending rate as the decision has been perceived to reduce banks’ profit-making ability and capacity to declare good dividend.

The DSEX lost 423 points in the last eight sessions with only one positive day.

Market analysts said that the dispute between Grameenphone and the telecom regulator was getting worse every day, which was perceived as a reason for the foreign investment outflow.

The continued flight of foreign investment also came as a heavy drag on the market. Foreign investors have withdrawn some Tk 980 crore over the last 10 months.

Besides, a number of brokerage houses continued their ‘forced sells’, which have aggravated the situation further.

EBL Securities in a recent daily market commentary said, ‘The investors had been suffering from a lack of confidence for a long time, while below par data on major macroeconomic indicators were dampening investors’ confidence badly.’

Trusted securities have also not been spared from the restlessness of the downward trend at the market as blue-chip index DS30, which groups 30 prominent companies, hit almost a seven-year low on Tuesday.

The turnover on the DSE plunged to Tk 262.81 crore on Tuesday from Tk 286.77 crore in the previous trading session.

Out of the 351 scrips traded on Tuesday, 293 declined, just 32 advanced and 30 remained unchanged.

The average share prices of almost all the sectors declined on the day.

The share prices of non-bank financial institutions sector plunged by 3.2 per cent, telecommunication 2.9 per cent, textile 2.5 per cent, and bank 1.2 per cent on the day.

LafargeHolcim Bangladesh led the turnover chart with its shares worth Tk 18.55 crore changing hands on the day.

Meanwhile, the finance ministry senior secretary Ashadul Islam at a meeting with Bangladesh Merchant Bankers Association on Tuesday said that the ministry asked the four state-run banks to invest in the capital market to increase the liquidity flow in the market.

The capital market supervision committee, consisting of representatives of the finance ministry, BB, BSEC and ICB, will sit with the BMBA on January 20.

Bangladesh Bank governor Fazle Kabir on Tuesday assured the representatives of the Dhaka Chamber of Commerce and Industries that the central bank would take measures for the development of the capital market and to make the market stable.

The central bank will review all the proposals it has received from the stakeholders in this regard and take measures in the light of the best proposals so that all stakeholders benefit from the measures, he said.