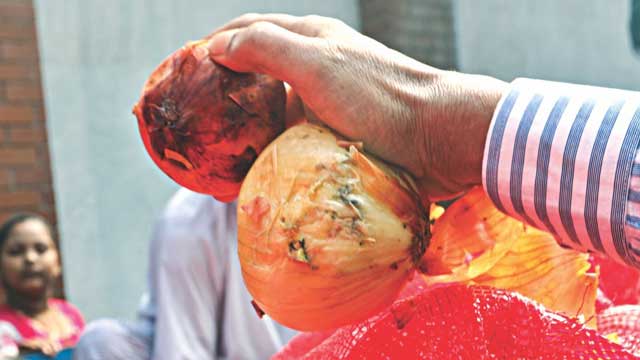 Bangladesh is likely to decline India’s repeated pleas to jump start onion exports as the Trading Corporation of Bangladesh currently has enough stock of it and the new variety of the tuber is expected to reach domestic market soon.

Three reasons were cited for turning down the requests, said one of the officials of the Bangladesh high commission in New Delhi.

Onion exports from India were stopped on August 30 last year following a scarcity and a sharp rise in its domestic prices.

India’s readiness to restart onion export comes against the backdrop of reports that a majority of Indian states are not interested to use imported onions despite the key kitchen staple being offered to them at an average landed price of Rs 55 per kg.

So far, only Andhra Pradesh, Kerala, Telangana, Uttar Pradesh and West Bengal governments have taken the 2,000 tonnes of imported onions, which came from Turkey, Afghanistan and Egypt.

Sources said the taste of imported onions is different from the home grown ones and consumers are not buying it in retail markets when domestic onion is available at the same rate.

So, the Indian government is angling to offload a portion of the 18,500 tonnes of imported onion to Bangladesh.

“We are worried about its disposal because it is a perishable commodity,” Ram Vilas Paswan, India’s consumer affairs minister, told reporters in New Delhi on Tuesday.

Retail onion prices across India, which ruled over Rs 100 per kg in most cities for the past two months, have started softening on the arrival of imported onions and new crop.

However, prices are yet to come to the normal levels.

A shipment of 5,500 tonnes was cancelled before it set on sail in the absence of demand, said Avinash Srivastava, India’s consumer affairs secretary. India opted for onion imports to increase the domestic supply and check prices. The government is importing onions through state-run trading agency from Turkey, Afghanistan and Egypt.

Onion prices shot up due to a 25 percent fall in domestic production.

The Daily Star yesterday tried several times to reach Commerce Minister Tipu Munshi but failed to get through to him due to the parliamentary session.