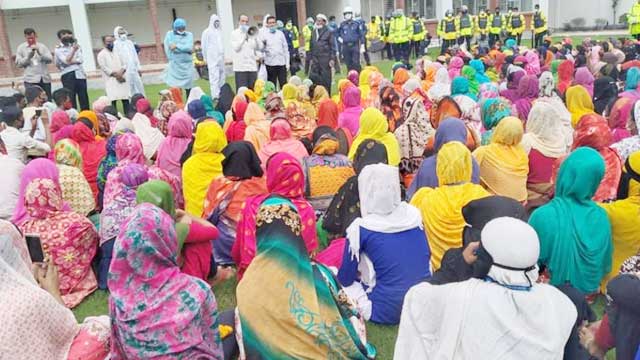 Around 2,000 ready-made garments (RMG) workers peacefully protested inside their factory demanding outstanding dues in Sreepur municipality of Gazipur on Sunday.

The workers remained seated at their workstations in the factory of MHC Apparels Ltd from morning to afternoon. They demanded the unpaid salary of three-months, said the protesters.

The protesters also alleged that the authorities locked the main gate when they (protesters) tried to leave the factory in the afternoon. The authorities allowed them to leave in the evening.

Workers said the authorities had earlier announced multiple dates on April to clear the salaries, but every time they came only to find the factory shut. On Sunday, they were told to work at the factory and that their arrears will be paid on May 13.

SR Azad, assistant general manager of the factory, said: "Payment for the overtimes for the month of February and March is yet to be cleared out. Each of the workers received Tk4,000 for the month of March and the rest of the amount will be paid on May 13."

He added that payment was delayed due to complexities in the banks.