Workers of shut RMG factories to get 65pc salary for April 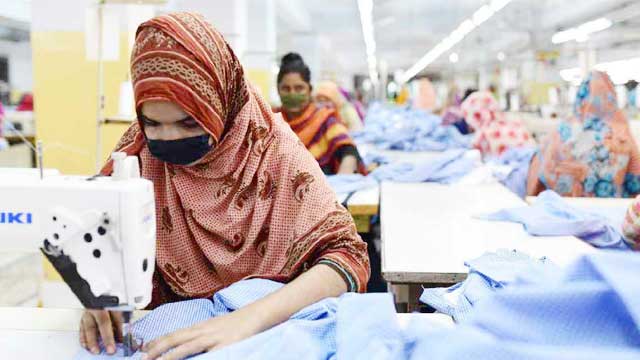 Readymade garment (RMG) workers of factories that were kept shut during the general holidays, will receive 65 percent salary for the month of April.

The decision was taken at a meeting presided over by State Minister for Labour and Employment Munnujan Sufian at Shram Bhaban, said a handout from the ministry.

Earlier on April 28, a tripartite meeting of owners, workers and the ministry decided to pay 60 percent salary of workers of shut RMG factories for April, instead of the full amount.

The decision to pay five percent more was taken on the demand of some workers’ organisations. This five percent will be paid to workers with the salary of May as the final account for April’s salary is already done.

Meanwhile, another tripartite meeting of the government, factory owners and workers over Eid bonus will be held next week.

A large number of garment factories were opened during general holidays.

Thousands of RMG workers entered Dhaka from northern and southern districts to save their jobs, ignoring risks to their lives as the factories opened amid the risk of spreading coronavirus.

The government said garment factories around Dhaka have been reopened in a limited scale as there is a risk of losing international market of RMG products due to coronavirus crisis.

Bangladesh is the second largest exporter of RMG goods after China.

Also read: Coronavirus: Over 700 RMG factories go back into operation