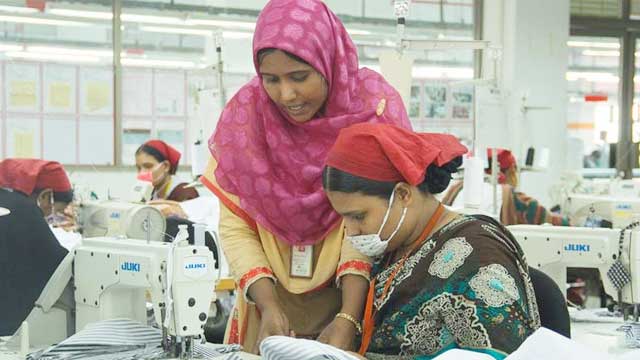 At a meeting with state minister for labour Monnujan Sufian held at Shrama Bhaban in Dhaka on Thursday, the garment exporters proposed to pay 60 per cent of basic as festival allowance to the workers saying that the factory owners would not be able to pay 100 per cent as business disrupted heavily by the coronavirus pandemic.

Earlier, RMG workers received 60 per cent of their gross wages during the closure period of factories in April due to general holidays announced by the government to contain coronavirus outbreak.

According to the government decision, workers would get 5 per cent more for April with the wages of May.

‘Factory owners in the meeting expressed their inability to pay 100 per cent festival allowances to the workers and proposed to pay 50 per cent. But labour leaders strongly oppose the proposal,’ China Rahman, secretary general of InustriALL Bangladesh, told New Age following the meeting.

Opposing the factory owners proposal, the labour leaders said that workers would not accept cut in the amount of festival allowances after getting deducted amount of wages in April, she said.

They warned that they might take to the streets with the decision of cutting Eid bonus amount.

At one stage, state minister for labour asked factory owners to pay festival allowances equivalent to one month basic wages to the workers before Eid-ul-Fitr.

Following the meeting, the factory owners said that the decision regarding festival allowances of workers remained pending and a follow-up meeting would be held to settle the issue.

The meeting decided three days Eid-holiday for the RMG factories so that workers could not leave their work stations amid the surge of coronavirus outbreak in the country, said sources.

The meeting also decided that workers would get their wages of May with in the seven working days of June.