A deeper look at the Bangladesh election 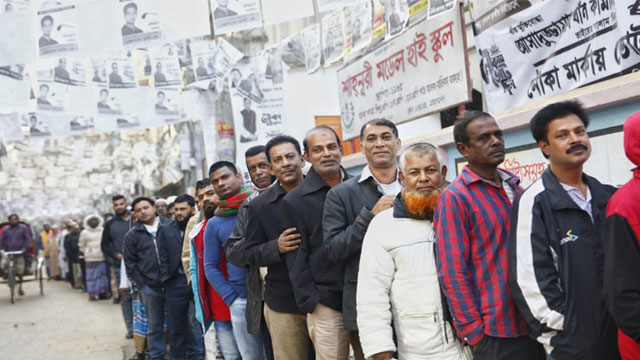 On December 30, Bangladesh held its 11th parliamentary elections in which close to 100 million Bangladeshis voted at 40,000 polling stations across the country.

But even before polling began, many observers concluded that the vote, conducted under the country's increasingly authoritarian conditions, would be a managed affair. It was clear to many that the ruling Awami League party would tilt the election process in its favour utilising coercive mechanisms.

News coverage, reports from human rights organisations, confidential party documents leaked by journalists, and unusually candid public pronouncements by ruling party members, some of which went viral on social media ahead of the polls, revealed the government's elaborate plans for voter suppression, aggressive policing, systemic arrests and detentions of opposition activists - all with the singular objective of managing the election in the ruling party's favour.

Given that no credible independent political polling exists in Bangladesh, analysts were left with reviews of spontaneous public engagements in political processions, social media sentiment analysis and online polling as the only tangible measures for gauging popular support towards any political party. However unscientific, they showed that there was underpinning momentum towards voting for the country's major opposition alliance during this election cycle.

Even the most partisan of estimates coming from government-affiliated pollsters, some prepared by nebulous characters and organisations, allotted at least 49 parliamentary seats for the opposition out of the 298 contested. However, as the results came in, it seemed as though the government's elaborate machinery ended up over-managing the election and lost its grip on its own script along the way.

The Awami League party and its alliance ended up bagging 288 seats, leaving just seven seats for the Jatiya Oikko Front, the major opposition alliance led by the Bangladesh Nationalist Party (BNP). There were constituencies where the ruling party won 99.9 percent of the votes, and hardly any ruling party candidate lost the contests, according to unofficial results.

During four prior elections held under neutral caretaker governments between 1991 and 2008, no winning party ever won more than 48 percent of the popular votes. In this election, the winners bagged more than 90 percent of the total votes cast, raising serious doubts over the fairness of the polls.

The December 30 election was relatively peaceful in comparison to Bangladesh's previous election cycles. However, the relative peace was achieved through the systemic oppression the state machinery carried out against the opposition over the past 10 years, leaving it effectively hobbled and neutered.

Last year, opposition leader Khaleda Zia was sent to jail on "corruption" charges; her son, Tarique Rahman, the acting party chief, is currently in exile in the United Kingdom sentenced to life imprisonment in relation to a 2004 attack on Awami League leader Sheikh Hasina; and the lucky among the remaining opposition leaders are either already in jail or have hundreds of pending charges against them.

The unlucky among the opposition have been executed or forcibly disappeared. The months leading up to the election saw the highest number of extrajudicial killings over the last six years.

When the opposition appeared to be still managing to foster an effective alliance, bringing together major leftist, centrist, and Islamic elements of Bangladeshi politics, thugs wielding machetes and sticks were sent to their rallies.

Few visible election activities by the opposition alliance were allowed to take place; opposition campaign posters were removed from the streets, and opposition volunteers were arrested with unusual precision across the country.

Owing to widespread intimidation and systemic oppression, the opposition parties failed to place polling agents in most polling centres to ensure proper counting and certification of ballots.

The ruling party managed to pull off this campaign of intimidation ahead of the polls, thanks to the direct control it has managed to establish over key state organs since the early 2010s. How did it manage to do that?

For about a decade and a half, starting in the mid-1990s, Bangladesh witnessed four relatively fair elections. What guaranteed the relatively smooth electoral process was a legal provision that required the government to hand over power to a caretaker cabinet for 90 days prior to the election. This neutral unelected body organised and supervised the vote and ensured that there was no interference from any side.

But in 2011, an Awami League-dominated parliament overturned the provision and the following election was marred by violence and irregularities. In parallel, the ruling party also launched a process of systematic politicisation of state institutions.

Over the past decade, judicial appointments from the lowest to the highest courts have been made along party lines. In 2017, Surendra Kumar Sinh, the sitting Chief Justice of Bangladesh was forced to resign and leave the country when he acted out of sync with the party line. Such subjugation of the judiciary allowed arbitrary arrests and political detentions in the lead-up to the latest election.

Police recruitment has also been done along party lines, rendering the police force an easy tool of political suppression.

Recruitments for the civil bureaucracy, including the election commission, are also going through a partisan process where about 30 percent of all government jobs are statutorily allocated to the children of "freedom fighters", a loosely defined group of men who fought for Bangladesh's independence some 47 years ago, under the leadership of Hasina's father, Sheikh Mujibur Rahman.

Given that the government certifies an ever-expanding list of Awami party men as "freedom fighters", such preferential recruitment has developed a clan-based civil bureaucracy which works in favour of the ruling elite. Key figures among the bureaucrats also receive perks that often go beyond the hefty salary raises they already receive.

Meanwhile, the army has been kept busy with lucrative construction deals and UN peacekeeping missions - a source of hard currency for the top officers - and away from the troubled political and electoral processes.

In a nutshell, the ruling party has created a politicised and dependent state apparatus in which state bureaucrats have to ensure the continuing rule of the incumbent in order to preserve their perks and privileges. Such a patron-client system emerged in Iraq, Syria, and Libya with disastrous consequences.

Bangladesh has been gradually sliding back into authoritarianism over the last decade, after experiencing a chaotic democratic moment for about two decades in the 1990s and 2000s, when the country's two major political parties took turns in power. There were teething pains in that nascent democracy, but people still rejoiced over their rights to elect and change their political leadership.

What happened on December 30 clearly shows that Bangladesh has officially become a one-party state of an exotic variety, where elections take place, yet votes are not properly counted; where numerous opposition parties are allowed to exist, but are effectively rendered impotent and barred from ever reaching power; and where the raucous media are "free" but are only able to produce a self-censored cacophony of government-approved narratives.

Today in Bangladesh, a party has its own state which has one mission: to maintain the status quo. There are certainly at least two countries that are happy about that status quo remaining - China and India - both of which stand to benefit politically and economically with Hasina in power.

Some Western countries, which have been critical of the Bangladeshi government in the past, have so far refrained from congratulating the winner. However, the Trump administration expressed its willingness to continue working with the new government, which may not mean much for Washington. But in Bangladesh, it is seen as a stamp of approval, boosting Hasina's legitimacy.

This does not bode well for voices of dissent. The already disabled opposition alliance will likely see more heavy-handed repression and more of its activists thrown into jails, especially as the winner of the elections is making public pronouncements that it is a badge of honour to be called "authoritarian".

This new wave of oppression will likely keep Bangladesh's streets quiet, at least in the short term. But the absence of violence should not trick us into thinking the country will settle into authoritarian stability.

A rigged election which effectively sidelined, neutered and humiliated the political centrists in Bangladesh will ultimately swell the ranks of rejectionists of all varieties, including the ones who reject democracy, secularism, and political change through peaceful means. And that does not bode well for the future of the country.-Al Jazeera

Shafquat Rabbee is a Bangladeshi-American geopolitical columnist and an Adjunct Faculty at the University of Dallas.