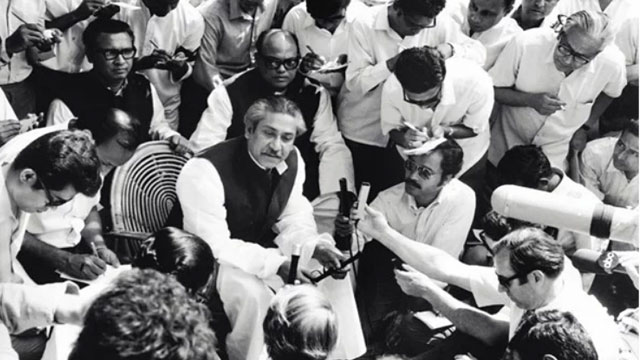 About two years ago, when a friend and I were discussing Bangladesh politics and history over dinner, he mentioned to me a puzzling historical factoid: the last act of the effort to save a United Pakistan took place in Dhaka in March 1971. It involved tense and difficult negotiations between then East Pakistan’s political leader Sheikh Mujibur Rahman and United Pakistan President Yahya Khan to find a political solution to the political crisis that led ultimately to the creation of Bangladesh. As the negotiations began to break down and the threat of a military crackdown became more real every day, Sheikh Mujib told all but one of his close associates to “get out of town.” We can never know what he was thinking as he left no record of his thoughts, but he must have had some idea of an occupation by West Pakistan forces and a government in exile somewhere. Yet Mujib made no effort to run and was arrested when the crackdown came on March 25 and flown to West Pakistan where he was a political prisoner and, at least potentially, could have been tried for treason. I had read somewhere of this but had never given it much thought until my friend mentioned it, but it has stuck tantalisingly in my mind as a mystery of history. I guessed that he might have thought he could still come to an agreement with the West Pakistanis on some confederal arrangement between the two parts of Unified Pakistan, but given the military build-up which was well known, such a motive seems problematic at best.

Now, perhaps, the mystery is solved. There recently appeared in a publication called the Bangladesh Chronicle an article about Mujib’s release from prison in December 1971 which describes a meeting between Mujib and Zulfikar Ali Bhutto, who in the shambles of the West Pakistan government meltdown after the staggering loss of its eastern half, had been picked by the Pakistan Army to be the new amputated Pakistan’s President and Martial Law leader while the army, by popular demand, gave up power and, for a time at least, went back to its barracks.

It was a very interesting meeting that we now know about, because there was a witness—one who has come forth recently. He was a spy the West Pakistanis had planted in Mujib’s cell, ostensibly both a convicted felon and Mujib’s servant. And there is a video of this witness telling about his time as Mujib’s constant companion, which has been shown on Pakistan TV a couple of years ago.

It evidently didn’t draw much interest from Pakistan viewers, perhaps because of the political shenanigans going on in Pakistan at the time – the trial of Nawaz Sharif, his conviction and incarceration, and the election of the PTI and so on. I am told also that a similar video was shown by one obscure Bangladesh TV channel, but was immediately suppressed but the government. This latter point is hearsay.

It was almost inevitable that the negotiations for a governing pact that took place in Dhaka in those days of March 1971 would fail. Neither side could possibly give in

In the meeting itself, according to the witness, Mujib first asked Bhutto why he was there, and Bhutto replied that he was now President and Chief Martial Law Administrator of Pakistan. Mujib asked how that had happened, and Bhutto explained that India had intervened, the Pakistan Army had surrendered, and Yahya Khan had resigned. At that, according to the witness, Mujib sprang to his feet and said (“scornfully” the writer of the article says and certainly loudly): how can it be? How can you be the president? You are a loser, a minority (in the elections). I am the majority leader. I have the right to those positions, not you. Take me immediately to a radio or TV station, I will denounce all these and keep East Pakistan as before. I will nullify all these and fix everything. I am not using quotation marks, these words are surely the words of the witness, not the words of Mujib; while I am not questioning the meaning of the words, it serves no purpose to put words in his mouth.

To make it clear why Mujib was so surprised by the news, I must point out that he was kept without any news of the outside world while in the Pakistani prison. So, he knew nothing of the vicious guerrilla war that had ensued and the numerous atrocities the Pakistanis had committed, the 10 million refugees in India, the Indian intervention and victory, the Pakistan army’s humiliating defeat, and importantly the declaration of independence by the Bangladesh government in exile led by its Prime Minister Tajuddin Ahmed.

I must also add that the depiction by the spy of what Mujib said to Bhutto does not match what Mujib told Kamal Hossain he said to Bhutto when Hossain and Mujib met a few days later. Kamal Hossain, who was also imprisoned in solitary confinement by the Pakistanis and kept without news, reports this on page 114 of his mostly autobiographical bookQuest for Freedom and Justice. Hossain quotes Mujib as saying that he asked Bhutto, “How have you become President when I got twice as many seats in the National Assembly,” and when Bhutto offered him the Presidency (which seems unlikely given Bhutto’s thirst for power) told Hossain that he replied that he would rather go to Bangladesh. There is inferential evidence also which supports the spy’s story: first, Mujib was reported to have said to Tajuddin Ahmed on his return to Dhaka, “So, you finally broke Pakistan?” Bhutto told Stanley Wolpert in his biography of Bhutto that Mujib had tried to convince Bhutto in a later conversation that he wanted to reconstruct a confederated United Pakistan. Third, Mujib told Anthony Mascareahas in London 1972 that he wanted to keep some link with Pakistan.

I wonder if Mujib really understood what he had set in motion. He had worked to build a party that ended up becoming the bearer of the dreams of Bangladeshis for equal rights and equal treatment. The party won the largest number of seats in the 1970 election for the National Assembly on that platform, a six-point platform that promised a better life. It seems likely, and not unreasonable, that he would aspire to becoming the leader of United Pakistan as the leader of that party. He could legitimately aspire to be the elected leader of United Pakistan. But, in part, the circumstances he had helped create – the insistence on equal rights for East Pakistan and East Pakistanis, the six-point program – worked against that. It was, in effect, a revolutionary program and a revolutionary party going up against a status quo military government and a West Pakistani political leader who was determined that he was destined to lead Pakistan. Yahya Khan claimed that Bhutto, not Mujib broke up Pakistan.

But it was almost inevitable that the negotiations for a governing pact that took place in Dhaka in those days of March 1971 would fail. Neither side could possibly give in. It reminds me of the American Civil War, one side believing that it couldn’t live without slavery, the other that it couldn’t live with it. And this is where Mujib’s failure of understanding stands out for me. He should have stayed with his troops, not waited patiently for the West Pakistan army, and his impossible vision (if that is what it was) of negotiating a deal that made him prime minister. Had he been leading that government in exile, he would have come back to Dhaka when the war ended still in full charge, and in full knowledge of the situation. He might have had better control of the forces that whipsawed him in the three and a half years that he was in charge. Maybe he wouldn’t have felt the need for BAKSAL, the one-party system, which proved his real undoing.-The Friday Times