As Bangladesh buries one dictator, another holds firm 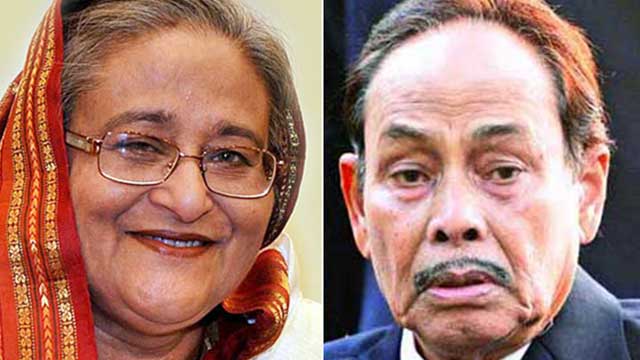 General Hussain Muhammad Ershad, who ruled Bangladesh for most of the 1980s, died on July 14 at the ripe old age of 89. His death marked a mundane end to one of the most controversial stints of power in the still-young country, inspiring Bangladeshis to look back on a legacy that mixed authoritarian rule with a later career of backstage politicking – the impact of which is still felt keenly today.

In Bangladeshi political vernacular, Ershad is referred to only as “the dictator.” Older Bangladeshis see the former strongman’s proclamation of martial law in 1982 as the catalyst for the destruction of the nation’s fledgling democracy. For younger Bangladeshis, he is remembered as a mere opportunist, more an enabler of autocracy than an autocrat himself. Regardless of how he is remembered, Ershad’s influence on contemporary Bangladeshi politics is undeniable, not least because of the critical support he provided to Bangladesh’s current leader, Sheikh Hasina.

Indeed, after a series of military coups from 1975 to 2007, Ershad’s backing helped Sheikh Hasina and her Awami League win “reasonably fair” elections in 2008. At the outset, there were hopes that Bangladesh would finally be able to entrench stable, functioning democratic norms and processes for the first time since independence in 1971. In reality, Sheikh Hasina’s current term in power has been marked by the kind of authoritarian politics Ershad never quite mastered. The major opposition party boycotted the 2014 elections, and the clearly unfair 2018 re-do was dubbed “farcical” by The New York Times.

While Hasina did not need a coup to come to power, her reliance on the levers of state to crush the democratic opposition upended hopes for pluralistic democracy in Bangladesh. In the run-up to the 2018 vote, thousands of opposition Bangladesh Nationalist Party (BNP) members and candidates were arrested on trumped-up charges. More than 40 candidates pulled out of the race after polls had already opened.

Under Hasina, the government has violently repressed political opponents and critics, manipulating the law to arrest and imprison activists, journalists and artists. Under the banner of Bangladesh’s “war on drugs,” security forces have killed more than 100 people and arrested thousands. Student protesters have been tortured in police custody. The Digital Security Act, for example, has been used to arrest online critics of the government, the prime minister, and even her relatives. Photographer-activist Shahidul Alam, for example, was detained for 107 days after calling out human-rights violations in an August 2018 interview on Facebook and with Al Jazeera television.

The harshest treatment, however, has been reserved for the BNP and its members. After an appeal by the country’s Anti-Corruption Commission, a Bangladeshi court recently doubled the jail term of opposition leader Khaleda Zia from five to 10 years. Sentenced early last year in relation to the Zia Orphanage Trust corruption case, Zia’s extended prison sentence was seen by many as a deliberate attempt to keep her out of the 2018 elections – and it worked.

“The run-up to the 2018 general elections in Bangladesh laid bare the government’s increasing bent toward ruling with an iron fist,” according to Brad Adams, Asia director at Human Rights Watch. “The government needs to recognize the democratic value in free expression, rule of law, and a vibrant civil society.”

Supporters of Sheikh Hasina point to the country’s economic growth to justify her stewardship. Once one of the poorest regions of Pakistan, Bangladesh was racked by extreme poverty after it declared independence. Since 2006, however, the country’s annual GDP growth has exceeded Pakistan’s by 2.5 percentage points annually; by 2030, Bangladeshis are projected to be richer than Indians.

One reason for this is the global migration of low-tech, labor-intensive manufacturing industries from manufacturing centers in China and other markets to Bangladesh. The country’s garment industry now accounts for more than 80% of the country’s export revenue, making Bangladesh the world’s second-largest apparel supplier after China. Real gross domestic product per capita has doubled in the last two decades, and the country appears to be on the same exponential growth curve as neighboring India, which has generally underperformed in the sector.

From a development perspective, however, the instability perpetuated by Hasina’s authoritarian regime – both now and in the long term – will always carry the risk of undoing the economic progress her government lays claim to. Last year, for example, national third- and fourth-generation (3G and 4G) Internet services were shut down amid major student protests over Bangladeshi road deaths, and the country’s transport sector remains as corrupt, unregulated and dangerous as it was before the demonstrations.

Bangladesh’s international partners in North America, Europe and Asia should be speaking out against these policies. Instead, Sheikh Hasina has consistently dodged criticism of her iron-fisted repression, and has even managed to win awards like the United Nations’ Champions of the Earth prize. While the UN ostensibly recognized her for adding an amendment to the Bangladeshi constitution to include a directive protecting the environment, her willingness to ignore the democratic protections of that same document seems to have slipped under the radar.

Of course, given the recent reprisals against pro-democracy movements in Myanmar, Thailand and Hong Kong, Bangladesh’s democratic decline does not stand out in the region. All the same, Ershad’s death serves as a reminder of what could have been for Bangladesh, and what the country’s politics could still aspire to under better circumstances.-Asian Times