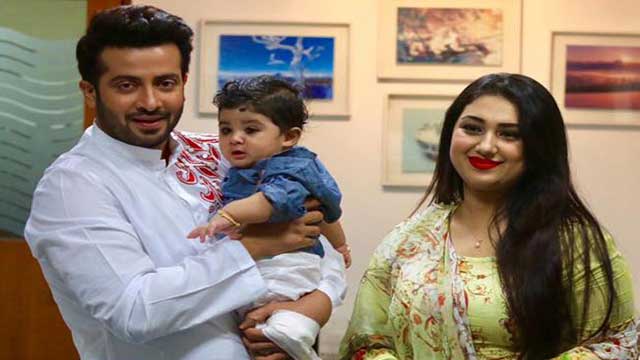 Dhaka, Dec 4 (Just News): Shakib and Apu are finally parting ways. Top movie star Shakib Khan has sent divorce papers to his wife, popular actress Apu Biswas. His lawyer sent the notice two days ago and Apu is likely to receive the papers today, Monday. It will take three months for the divorce to  officially go through.

Shakib Khan and Apu Biswas are both maintaining silence on the divorce proceedings. Their mobile phones are switched off.

The star couple married on 18 April 2008, but kept their marriage a secret. They continued their respective movie careers without giving away their secret marriage. Then in a sensational television appearance on 10 April this year, Apu told all. She turned up with their six-month-old son Abraham, and told the viewers, “I am Shakib’s wife. This is our son.”

Apu & ShakibAfter the marriage was made public, cracks appeared in Shakib and Apu’s relationship. Things went from bad to worse and they only met to discuss issues pertaining to their son Abraham.

And now their stormy marriage has culminated in divorce.

Friends and family of Shakib Khan say there are a lot of reasons behind the split. They cited Apu’s sudden TV appearance with Abraham to reveal their marriage, her criticism of Shakib and his family in the media, and her siding and working with Shakib’s opponents in the film industry.

Previously Apu had commented to the media, “I will not make any comment about divorce. If there is a divorce, you all will definitely know about it. This is a completely personal matter. If any such thing happens, I will let you know.”