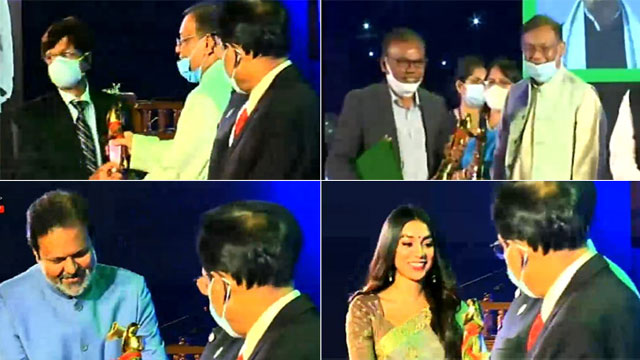 The prestigious National Film Awards have been distributed among recipients on Sunday in 26 categories for the year 2019.

The awards have been handed over on behalf of Prime Minister Sheikh Hasina at a colourful ceremony at Bangabandhu International Conference Centre (BICC).

The premier has attended the programme virtually from her official residence Ganabhaban.

The Lifetime Achievement Awards has been given to renowned actors Masud Parvez (Sohel Rana) and Kohinoor Akhter Suchanda for their remarkable contributions to the film industry.

"No Dorai" and "Fagun Haway" have received joint awards in the Best Film category.

Zahid Hasan has got the award for his negative role in "Shapludu".

Tanim Rahman Angshu has received the National Film Award in the Best Director category for "No Dorai" and this film has bagged a total of six awards.

The highest number of awards for 2019 has been secured by the Masud Pothik directorial "Maya: The Lost Mother". The film has won a total of eight awards in different categories.

Mrinal Kanti Das got the Best Singer (male) for the 2019 National Film Awards while Momtaz Begum and Fatima Tuz Zahra Oyshee were given joint awards for Best Singer (female).

Awards in the category for Best Music Composer were jointly given to Tanvir Tareq and Abdul Kadir.

The Best Lyricist Award has been jointly given to Dr Kamal Abdul Naser Chowdhury and Nirmalendu Goon, while Emon Chowdhury has got the award for Best Music Direction.

The Best Child Artiste award has been given jointly to Afreen Akhter and Naimur Rahman.