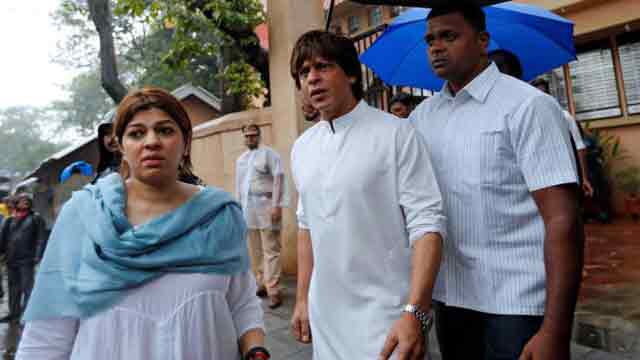 Mumbai, Dec 6 (Just News): Bollywood stars paid their last respects to screen legend Shashi Kapoor at his funeral Tuesday as tributes poured in for the multiple award-winning actor who died after a long illness.

Veteran Indian cinema icon Amitabh Bachchan, who starred alongside Kapoor in several hit Hindi films of the 1970s, and actor Shah Rukh Khan were among mourners at the ceremony in Mumbai, the home of Bollywood.

Kapoor appeared in more than 150 films and was a member of Indian cinema's most famous acting dynasty. He died on Monday aged 79 after a years-long battle with kidney disease.

Actors and directors from across the Hindi movie industry paid tribute to Kapoor who was one of the first Indian actors to work abroad, appearing in several Merchant Ivory films.

He often played the role of romantic action hero and was known for his suave good looks.

In a blog post Tuesday Bachchan described Kapoor as an "incredibly handsome man" with a "devastating smile complementing the twinkle in his eyes".

Shashi was the youngest son of Prithviraj Kapoor, a pioneer of Hindi film and theatre. His eldest brother Raj Kapoor, who died in 1988, was also a famous Hindi movie star.

He was also adored for his role opposite Bachchan in the hit movie "Deewaar" (The Wall, 1975) in which he delivered one of Hindi cinema's most famous lines -- 'Mere paas maa hai' (I have a mother).

In 1972 he starred alongside actress Simi Garewal in the American film "Siddhartha".

Garewal said she was "deeply saddened" by Kapoor's death.

"The last of that generation of Kapoors is gone. A gentleman and friend is gone. All that remain are his memories," read a post on her Twitter page.

Acclaimed director Karan Johar described Kapoor as "the most charming and enigmatic actor ever... a gentleman movie star!"

"His legacy in film and theatre is exceptional...thoughts and prayers with the family....his work will always live on..." Johar wrote on Twitter.

Shashi Kapoor was married to English actress Jennifer Kendal for 26 years until her death in 1984.

He won numerous acting prizes and in 2011 was honoured with the Padma Bhushan, one of India's highest civilian awards.