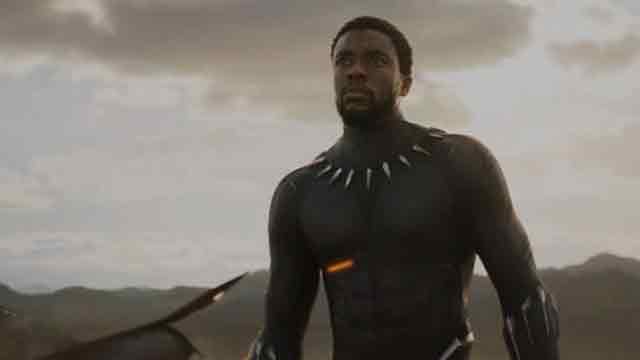 The Disney/Marvel superhero film has now earned a domestic total of just over $600 million while becoming the first film since "Avatar" in 2009 to hold the top spot for five straight weekends.

"Black Panther," starring Chadwick Boseman as the superhero king of a utopian African country, has almost singlehandedly kept the year's box office total slightly above the same period last year. It is only days away from overtaking another Marvel film, "The Avengers," as the all-time top-grossing superhero film in North America, Variety reported.

In something of a surprise, third place went to a low-budget, faith-based drama, "I Can Only Imagine," which took in $17.1 million -- the biggest net ever for a film from Roadside Attractions.

Made for a modest $7 million, the movie stars J. Michael Finley as the lead singer of a popular Christian band. Dennis Quaid and Cloris Leachman also star.

In fourth, down two spots from last week, was Disney's science fantasy adventure "A Wrinkle in Time," at $16.6 million, a 50 percent drop from last weekend. "Wrinkle," the story of a girl's search through time and space for a missing father, stars Storm Reid, Oprah Winfrey, Reese Witherspoon and Chris Pine.

And in fifth place was new Fox release "Love, Simon," at $11.5 million. The film stars Nick Robinson in what would be a classic love story -- except that it is said to be the first romantic comedy from a mainstream studio to be told from a gay teen's perspective.

Rounding out the top 10 were: