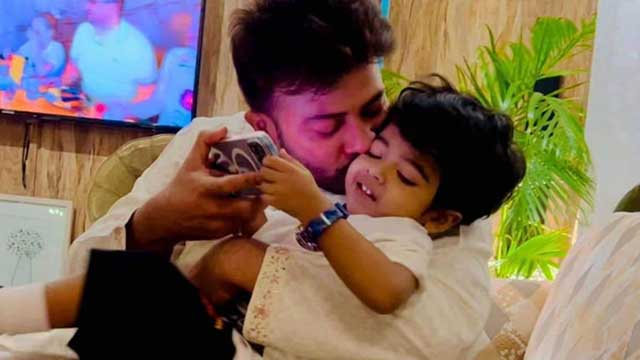 For the last few days, there has been a lot of buzz about Shakib Khan and Shabnom Bubly, after the latter uploaded a photo of a 'baby bump' on Shakib Khan and Apu Biswas' son, Abraham Khan Joy's birthday. According to close family sources, Shakib and Bubly are already parents to a 2-and-a-half-year-old baby boy, named Shehzad Khan Veer.

According to sources, Bubly became a mother at Long Island Jewish Medical Hospital in New York, USA. She gave birth to a baby boy on March 21, 2020.

The actress went into hiding, after she gave birth to their child. She reportedly flew to the US on an Emirates Airlines flight in January 2020. After 9 months, she came back to shoot the films "Bir" and "Casino".

Shabnom Bubly first came into the discussion by acting opposite Shakib Khan in the film 'Bossgiri'. While acting in the film , the news of their love affair was heard at one stage. Shabnam Bubly's affair with Shakib Khan has been under discussion for several years. However, neither ever clearly said anything about it.

Meanwhile, on September 27, Bubly posted two pictures of her baby bump on her verified Facebook page with the caption, "Throwback to America".

Bubly and Shakib were in talks for two days. Although they did not say anything clear about the child, both of them remarked that they will bring the matter in front of everyone in due time.