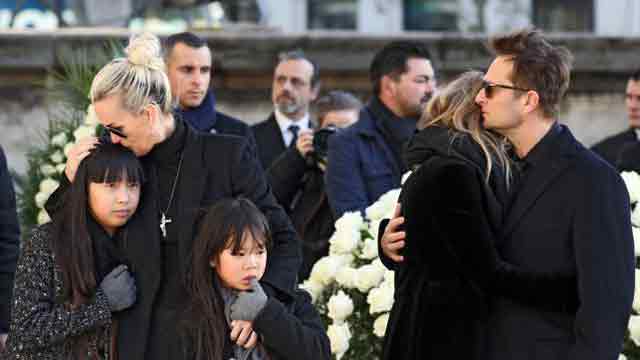 Dhaka, Dec 10 (Just News): Thousands of people lined the streets of Paris on Saturday as a convoy of 700 Harley Davidson motorcycles escorted the white coffin of late French rock and roll giant Johnny Hallyday to a memorial service attended by French stars and politicians.

Hallyday's hearse drove the length of the famous Champs Elysees from the Arc de Triomphe to Place de la Concorde, in a rare honour usually reserved for foreign statesmen on July 14 National Day.

As his band played instrumental versions of his biggest hits, the crowds belted out the words, many in leather biker jackets and carrying pictures of Harley Davidson enthusiast Hallyday, who died of lung cancer on Wednesday.

Largely unknown abroad, Hallyday was a household name in France, where he had tens of millions of fans and sold more records than any other singer in a career spanning five decades.

"The French Elvis," as he was known, Hallyday made a name for himself with French versions of American rock and pop songs, including "House of the Rising Sun", which many French people only know as "Le Pénitencier", one of his biggest hits.

Fans gather outside the Madeleine Church to attend a ceremony during a `popular tribute` to late French singer and actor Johnny Hallyday in Paris, France, 9 December, 2017. Photo: ReutersHis death on Wednesday sparked days of national mourning, with broadcasters providing wall-to-wall coverage of the rocker's life, with reams of black-and-white film and song tapes tracing the history of a man regarded by many, non-fans included, as part of French national heritage.

On a cold, sunny day, more than 1,500 policemen cordoned off central Paris in one of the biggest funerary ceremonies since the death of singer Edith Piaf in 1963.

President Emmanuel Macron was set to give a eulogy at the La Madeleine church in a ceremony attended by his predecessors Francois Hollande and Nicolas Sarkozy as well as several government ministers and French pop culture stars.

Hallyday has sold more than 100 million albums, mostly in the French-speaking world, and drew huge crowds at his performances. More than 750,000 people attended a free concert he gave near the Eiffel Tower on France's Bastille Day national holiday in 2009.

Hallyday will by buried on the French Caribbean island of Saint Barthelemy, where he owned a villa.