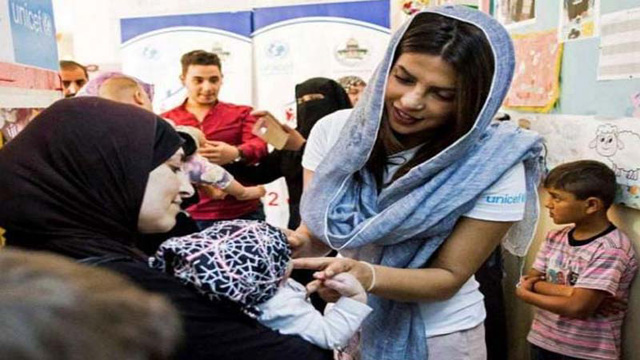 Priyanka Chopra has been working hard as a UNICEF Goodwill Ambassador towards social causes around the world.

It was Angelina Jolie who was first to take up the cause of fighting for the rights of refugees being a Goodwill Ambassador for UNHCR and now Priyanka has taken the baton ahead.

The international star received the Mother Teresa Memorial Award for Social Justice for her compassion and kindness and her connection with today's youth. However, as she couldn't attend the event, her mother collected the award on her behalf.

Madhu Chopra said, I humbly accept the award on her behalf. As a mother, she is immensely proud to have a child who is so compassionate and has so much kind.

She said that PeeCee proves the saying ‘the more you give the more you get’ and was influenced by Mother Teresa even in childhood.

Madhu added that Priyanka has been supporting Prem Niwas in Bareilly.

Concluding her words, she said that it is justifiable that Priyanka is receiving this honourable award and she is very proud of her. She even said that the actress will be humbled to know that her efforts have been recognised by the foundation that believes in helping the unprivileged people.