96’ review: Embark on this nostalgic trip with lilting music 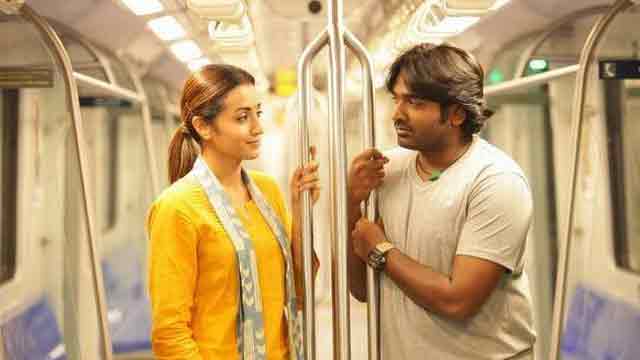 Dhaka, Oct 4 (Just News): ‘The phrase “events that unfold in a single night” usually refers to fast, thriller-mode cinema. ‘96 also chronicles happenings of a single night, but takes its own time, justifiably, to set up its sequences and characters.

K Ramachandran (Vijay Sethupathi), a travel photographer, is at the centre of the story. He’s mostly off social media but when he drives past Thanjavur, the town he grew up in, memories start flooding him and he tries reconnecting with all his old classmates.

A school reunion is planned – and it sees people from all walks of life – but Ram is looking out for Jaanu (Janaki, his childhood crush, played by Trisha). This is a premise that has been dealt with in cinema before; films like Autograph, Azhagi and the Malayalam flick Premam have travelled similar paths. But ‘96 is about the nostalgia and more. It is also a commentary on how we ought to respect the past because it never really leaves us.

As with most similar film stories, ‘96 resorts to some beautiful flashbacks. We get right into the mindset of Ram and Jaanu, how they’d have felt for each other during their school days. Ram is bashful most of the time, while Jaanu is more of the extrovert.

It remains that way after many years when they meet as well. ‘96 reveals a lot about helplessness, the pain in knowing that a few things have not gone your way. In fact, when asked if she’s happy, Trisha just says, “Santhosama irukena nu terla, Nimmadhi ah iruken nu sollalam (“I don’t know if I’m happy, but I am peaceful”). In ‘96, Trisha revives the actor we saw back in 2002, in Mounam Pesiyadhe, and delivers an effective performance as Jaanu. Vijay Sethupathi, on a roll these days, carries on his fine form. Watch him childishly pointing out to the school board’s roll of honour and shouting out his name. Watch him hug the school bell. He’s a natural, and his terrific chemistry with Trisha is one of this film’s highlights. It’s also a pleasant surprise to see veteran actor Janagaraj back on the big screen as the school watchman.

The voice overs in the initial school portions start getting to you after a point in time and the second half has to solely travels on the lead protagonists, but it’s to director Prem Kumar and the cinematographer’s (Shanmuga Sundaram) credit that they keeps us engaged fully in the lives (past and present) of Ram and Jaanu. Somewhere between all the awkward pauses and the lengthy conversations lie the poetry of ‘96.

That’s where music composer Govind Vasantha jumps in – he gets some lilting tunes in the flute and piano to fill up the blanks. He proves that a simple melody on a violin is all it takes for overwhelming applause in a packed cinema hall. That might just be among the biggest achievements of ‘96.