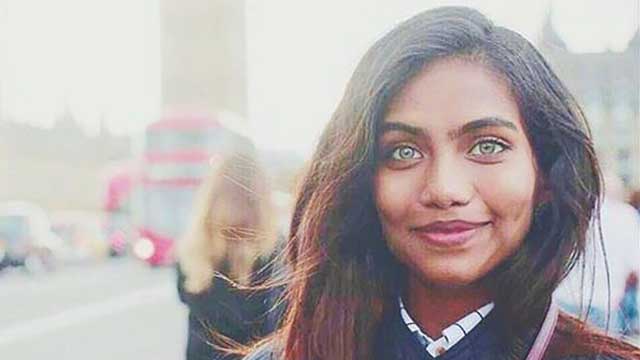 Father of the Maldivian model and medical student Raudha Athif slammed Police Bureau of Investigation today for what he said the agency’s failure to bring out truth behind death of his daughter.

In his facebook timeline, Raudha’s father Mohamed Athif shared a Maldivian media report of the PBI findings into her death and then commented, “The PBI prepared a fantasy report and made it look like a love drama.”

“It’s (PBI report) what they (PBI) want and how they want to end the case,” Mohamed Athif, a physician and politician in Maldives, wrote on facebook.

Mohamed Athif’s fresh reactions came after PBI submitted final report of investigation with a Rajshahi court yesterday into the case related to her death and ruled out the allegation of her murder.

The PBI report mentioned, Raudha took her life out of despair following her discovery of being cheated by her boyfriend.

Raudha, 20, was featured as a Maldivian model in a Vogue magazine cover in 2016, and was a second year student at Islami Bank Medical College in Rajshahi. She was found dead at her college dormitory room on March 29, 2017.

In his reactions, Athif wrote, “There is nothing new in this report. In fact, PBI did not do any such investigations. They kept the case pending for one year”.

He wrote, PBI Rajshahi branch head called him to their office in the name of investigation and asked him to accept the previous CID findings.

“They talk about some photos of her with her boyfriend and considered those as her serious relations with him which is ridiculous,” he wrote.

“They talk about Raudha’s last few incoming calls and conversations with her boyfriend, even when Raudha never wrote of killing herself. They never mention about the heated argument exchanged with her classmate (who was accused for murder),” he wrote.

He wrote that PBI or CID could not answer the marks of manual strangulation on her neck and that the doctors who did her second autopsy could not conclude on her suicide.

He wrote that Raudha’s body was discovered lying on her bed and none saw her hanging.

“Our investigation is flawless and supported by enough witnesses, evidences, medical forensics and digital forensics,” he said adding that his local superiors and higher officials at the police headquarters in Dhaka closely monitored the investigation procedures.

He also said that none of PBI forced the complainant to accept anything. “We recorded his statement what he gave us in written.”

About witnesses of her death, he said, “A number of witnesses saw her body hanging from the ceiling. A few of them include other Maldivian medical students”.

Raudha’s body was almost decomposed when it was exhumed from her grave for the second autopsy and the autopsy report could not come to a definite opinion, but it says, ‘possibility of suicidal hanging could not be excluded’.

“As per law, when there is difference between two forensic reports, the report that bears clear points would be acceptable,” he said adding that her first autopsy had found her death by suicide.

“The complainant filed the murder case based on wrong information what he had not verified,” he said.