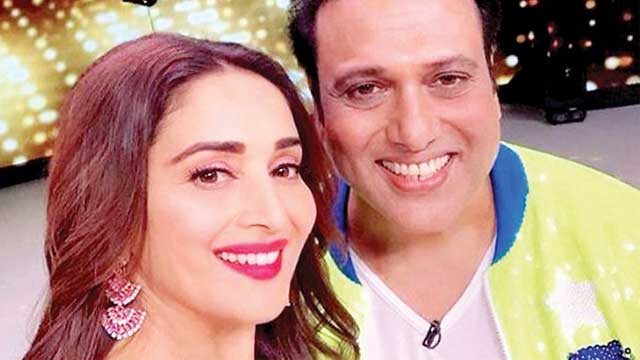 Madhuri Dixit and Govinda have danced together in many hit Bollywood films during the ‘90s.

According to a report in Mumbai Mirror, the two first danced to hit song Mera Dil Na Todo from Raja Babu while chatting among themselves in Marathi.

One of the contestants put up a Bharat Natyam performance, dancing to Ghaanan Ghaanan from Lagaan. Watching the performance, Govinda who was the celebrity guest, mentioned about his desire to learn a classical dance form. Madhuri, who happens to be one the main judges on the show, immediately stepped forward to give him an impromptu lesson in Kathak. The two danced to a song called Albela Saajan from Salman Khan and Aishwarya Rai-starrer Hum Dil De Chuke Sanam.

Speaking about the failure of Kalank, Madhuri had told Mid Day: ‘I have been in the industry for more than three decades. Ups and downs are a part and parcel of our work. So, it doesn’t bother me much when a film doesn’t work. Everybody gave their best. No one goes to the sets to do a half-hearted job. But in the end, certain things aren’t in our control. We have to move on. The film was received well overseas.’

Govinda, meanwhile, starred in 2018’s Rangeela Raja and FryDay, both of which were non-starters at the box office. After Central Board of Film Certification, asked for several cuts in his 2018’s film Rangeela Raja, the actor had alleged that there was a group of people in the industry, who are conspiring to not let his films release. CBFC reportedly refused to certify the film and had ordered for 20 cuts.