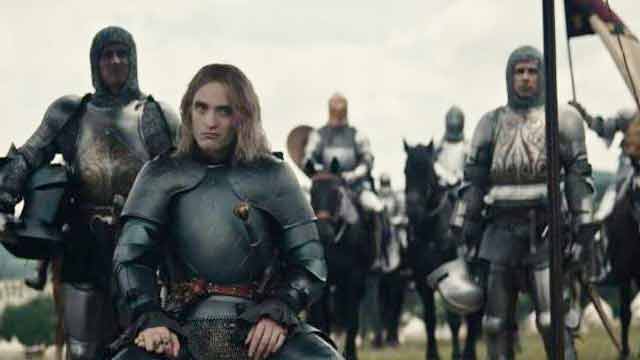 Stately and serene, The King is a rather demanding period drama that is given a necessary jolt of adrenaline by a truly anarchic Robert Pattinson performance. In different circumstances, Pattinson’s three-scene appearance could be mistaken for deliberate sabotage, but it’s easily the highlight of what is otherwise an extremely self-serious movie.

The former Twilight star, now unburdened by expectations that he neither demanded nor showed any inclination of fulfilling, is perhaps in the best phase of his career. Having satisfied his creative hunger by working with auteurs such as David Cronenberg, James Grey, the Safdie brothers and most recently, Robert Eggers, Pattinson seems to be ready to revisit big-budget films. The King is a disarmingly large-scale experience, skilfully directed by David Michôd, but in desperate need, like its protagonist, of a trim.

In a case of one performance’s sheer outrageousness effectively silencing another’s simmering intensity, Timothée Chalamet’s college dropout-turned-tech billionaire interpretation of a classic Shakespearean character is vastly overshadowed by Pattinson’s Pepe Le Pew take on The Dauphin. Both are inspired choices, miraculously championed by Michôd. It’s sort of like the dynamic between Heath Ledger and Christian Bale in The Dark Knight, or Bale and Mark Wahlberg in The Fighter.

But perhaps distracted by a responsibility of making a dignified Shakespeare adaptation — The King is based on the Bard’s Henriad — Michôd allows the technical achievements of his movie overshadow the tragic human story at its core.

It is a story about fathers and sons, war and peace, power and corruption. Chalamet plays Prince Hal, the ‘wastrel’ son of King Henry IV, at odds with his father’s belligerent politics. A pacifist at heart, Hal would much rather spend his evenings boozing and philandering with his friend Falstaff, than be bothered by his legacy.

But when he is crowned king after the deaths of his father and brother, Hal finds his ideals compromised. He is a good man — a Beautiful Boy, as fans of Chalamet would say — but he is hardly fit to rule, especially during wartime. The King isn’t as much a political parable as it is an examination of decency, and whether or not it has any place in politics.

In the beginning of his reign, Hal is ready to pardon prisoners, pay whatever ransoms are being demanded to free his own people, and solicit peace from adversaries because ‘they are my father’s enemies, not mine’. But after he is taunted by The Dauphin and winded up by one of his aides, Hal begins to question his own beliefs.

Like 2018’s Outlaw King — also produced by Netflix — The King also has a deliberate griminess, an unrefined aesthetic that comes across as having been minutely planned. It’s the cinematic equivalent of distressed denims, or a messy haircut. So even if the sword-fights appear to be un-choreographed, they’re immaculately lit by cinematographer Adam Arkapaw (who previously shot another Shakespeare adaptation, Justin Kurzel’s Macbeth, starring Michael Fassbender), and fabulously scored by the great Nicholas Britell, who, of course, is no stranger to Shakespearean intrigue thanks to his work on HBO’s Succession.

The King is an admirable film, but not one that can be enjoyed. Soon enough, clips of Pattinson’s performance will be edited together and made available on YouTube, as will the film’s extended final battle sequence. And it is an indication of the film’s disjointed nature that these elements can be enjoyed out of context as well.