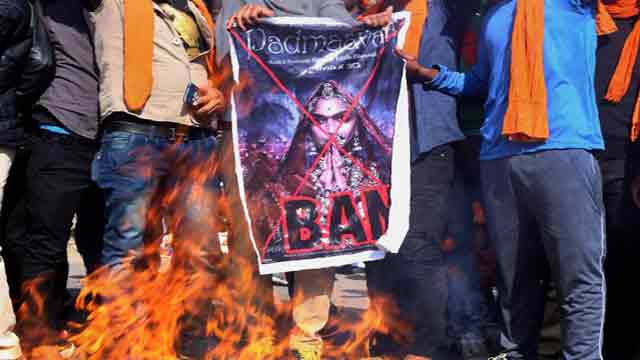 Dhaka, Jan 25 (Just News): A day before the release of 'Padmaavat', protests against the film intensified across several states with members of several fringe outfits taking out rallies, blocking roads and damaging vehicles.

Earlier in the day, 48 people were arrested in Ahmedabad for indulging in violent acts over the film's release. In fact, on Tuesday night, dissenting outfits unleashed violence and arson in parts of the city.

Mobs attacked shops, torched vehicles, and pelted stones. The destroyed property included at least 200 vehicles, including bikes and cars, that were either set ablaze or damaged.

Subsequently, theatre owners across Gujarat on Wednesday announced their intention to not give the film a screening till the matter was resolved, to ensure "the safety of customers as well as to save their property."

In Mumbai, more than 35 supporters of Rajput Karni Sena, one of the groups opposed to the film's release, were detained.

Police also arrested the Karni Sena's Chittorgarh unit chief, after its spokesperson declared that over 1,900 women of the community were "ready" to commit "jauhar" or mass immolation.

In Gurugram, protesters torched a bus and pelted stones, while in Meerut, they threw stones at a mall.

"Eight-10 masked men had come to pelt stones at PVS mall. Police is on the lookout for the men. We will provide security to the mall at the time of screening of the film," ANI quoted Civil Lines circle officer Chakrapani Tripathi as saying about the situation in Meerut.

Later in the day, clubs and bars in Gurugram were ordered closed from 7pm in view of the disturbances. The closure is expected to continue till further orders are passed by the authorities, reported ANI.

Some 50 activists of the Karni Sena burnt an effigy of the film's director Sanjay Leela Bhansali on Indore-Depalpur road.

The Karni Sena also gave a call for a 'janta curfew' on January 25 - the day of the film's release. This move is meant to prevent people from watching 'Padmaavat'.

The group's chief Lokendra Singh Kalvi said a 'janta curfew' on cinema halls would mean that the public will stop the film from being exhibited.

"We are adamant on our stand that this film should be banned. There should be a self-imposed curfew by people," he said.

Kalvi claimed that leaders of the Shiv Sena had assured the Karni Sena of their support in Maharashtra, reported PTI.