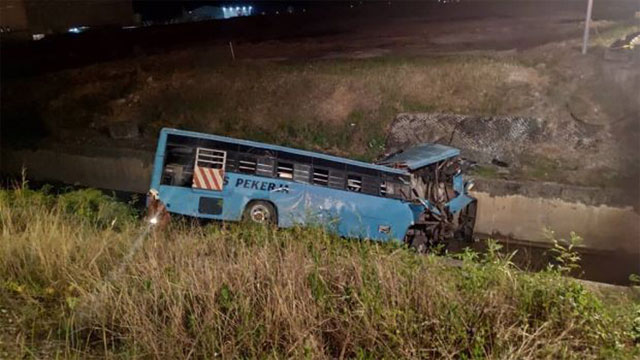 At least 11 people were killed including six Bangladeshi nationals were killed when a bus carrying workers fell into a monsoon drain after taking wrong exit near MASKargo in Kuala Lumpur International Airport of Malaysia last night.

The latest victim has been identified as Jagarnath Singh Danuwar, 31, from Nepal. He died at the Putrajaya Hospital while receiving treatment, reports nst.com.my.

The 11 dead comprise the Malaysian bus driver and 10 foreign workers; while the injured are made up of two Malaysian women and 30 foreigners. The non-Malaysians hail from Indonesia, Nepal and Bangladesh.

The bus was ferrying contract workers of the MAS Cargo Complex from their hostel in Nilai, Negri Sembilan to their place of work when the driver lost control of the vehicle, which skidded and crashed into a 10-metre-deep storm drain.

The bus driver and eight workers died on the spot, while two others died while being treated at the Serdang and Putrajaya Hospitals.

“Nine of the victims, including the 43-year-old bus driver, were confirmed dead at the accident spot.

He said that 13 other injured passengers were sent to the Serdang Hospital; 16 to the Putrajaya Hospital; four to the Banting Hospital; and one to the Kajang Hospital.

As of noon, five injured passengers from the Putrajaya Hospital and four from the Serdang Hospital were discharged and allowed to return home.

“The cause of the incident is being investigated under Section 41 (1) of the Road Transport Act 1987 for causing death by reckless or dangerous driving,” Zulkifli told reporters at the scene of the incident.

“Upon arriving, we secured the site of the accident and stabilised the bus, before extricating the trapped victims.

“We had to cut open several parts of the bus to reach them.

“It took us about an hour to complete the operation,” he added.

A list of the dead and injured:
Dead (Putrajaya Hospital):