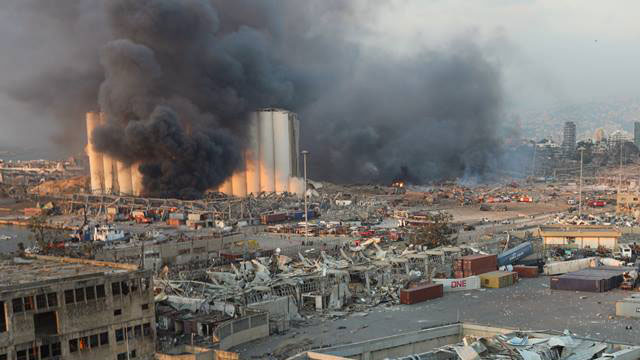 A powerful explosion rocked Lebanon’s capital Beirut Tuesday with images of smoke billowing from the city center floating on social media. Some local TV stations were quoted as saying by Associated Press that the blast was at Beirut’s port. Read in Malayalam

The AP also quoted Lebanese Red Cross official Georges Kettaneh as saying there are “hundreds of casualties” in Beirut, including dead and wounded.

A civil defense official on the scene of the blast said his men had evacuated dozens to hospitals and that there were still bodies inside the port, many of them under debris. The cause of the blast was not immediately known. Dozens of ambulances ferried the injured from the port area, where the wounded lay on the ground, AP staff at the scene said. Hospitals called for blood donations.

Lebanon’s Health Minister Hamad Hasan was quoted as saying by Reuters that an explosion in central Beirut on Tuesday had caused a “very high number of injuries” and extensive damage.

Hours after the explosion, Prime Minister Hassan Diab declared a national day of mourning, reported AFP. Also, President Michel Aoun has called for ‘urgent’ defence council talk in the aftermath of the explosion.

An Israeli government official says Israel had “nothing to do” with the blast, reported AP. Israel and Lebanon’s Hezbollah militant group are bitter enemies, and tensions have been high following a series of recent clashes.

Earlier Tuesday, Prime Minister Benjamin Netanyahu warned Hezbollah Israel would not hesitate to strike again if it felt it was necessary. But late Tuesday, the Israeli official said Israel was not involved in the Beirut explosion. He spoke on condition of anonymity because he was not authorized to discuss the matter with the media, AP said.Video taken by residents showed a fire raging at the port, sending up a giant column of smoke, illuminated by flashes of what appear to be fireworks. Local TV stations reported that a fireworks warehouse was involved. The fire then appeared to catch at a nearby building, triggering a more massive explosion, sending up a mushroom cloud and a shock wave over the city, reported AP.

Residents told AP that windows were blown out and a false ceilings dropped following the blast.

An AP photographer near Beirut’s port witnessed people wounded on the ground and widespread destruction in central Beirut.Iran’s foreign minister, Javad Zarif, put out a tweet in support of Lebanon. “Our hearts are with the Lebanese people in this great disaster. Mercy for the martyrs, patience and solace for the families of the victims and recovery for the wounded. Peace from God and mercy to this proud nation,” he tweeted.