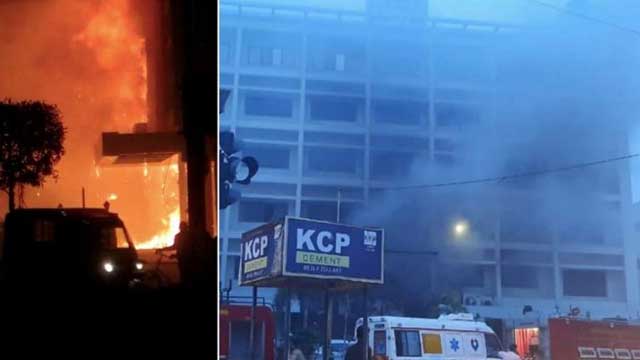 The facility had about 30 patients and 10 hospital workers Twitter

20 patients have been shifted to other hospitals

Nine people have died after a fire broke out at private hotel that was being used as a makeshift Covid-19 facility in Vijayawada, Andhra Pradesh on Sunday, Scroll.in reported citing ANI.

Twenty people have been rescued, according to NDTV.

The facility had about 30 patients and 10 hospital workers, PTI reported. Twenty patients were moved to other hospitals.

Several fire tenders were sent to the scene and are still fighting to put out the blaze.

Deputy Commissioner Mohammad Imtiaz told ANI that the fire was apparently caused by a short circuit. “The incident took place around 5 am,” he said. “Around 22 patients are being treated in hospital. We are evacuating the entire building.”

Prime Minister Narendra Modi said that he was deeply anguished by the deaths in the fire. “My thoughts are with those who have lost their loved ones,” he tweeted. “I pray that the injured recover as soon as possible. Discussed the prevailing situation with Andhra Pradesh Chief Minister Jagan Mohan Reddy and assured all possible support.”

Anguished by the fire at a Covid Centre in Vijayawada. My thoughts are with those who have lost their loved ones. I pray that the injured recover as soon as possible. Discussed the prevailing situation with AP CM @ysjagan Ji and assured all possible support.

— Narendra Modi (@narendramodi) August 9, 2020
Union Home Minister Amit Shah also assured help to the Andhra Pradesh government. “My condolences are with the affected families in this time of grief,” he tweeted. “Praying for the speedy recovery of those injured.”