Armenia and Azerbaijan erupt into fighting over disputed region 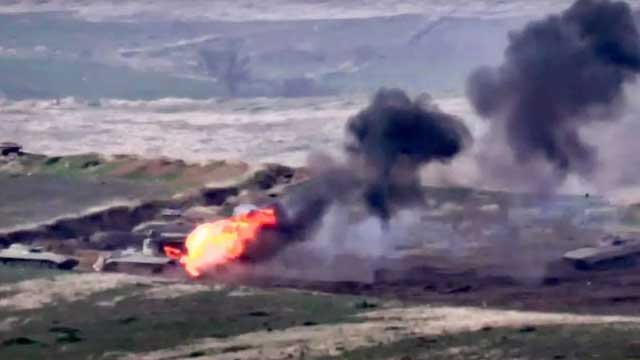 Heavy fighting has erupted between Armenia and Azerbaijan over the disputed Nagorno-Karabakh region, with civilian deaths reported by both sides.

Azerbaijan said it had begun a counter-offensive in response to shelling.
The region is internationally recognised as part of Azerbaijan but controlled by ethnic Armenians.

They broke away in the dying years of the Soviet Union. Both Armenia and Azerbaijan were part of the communist state, which sought to suppress ethnic and religious differences.

Amid the clashes, Azerbaijani President Ilham Aliyev said he was confident of regaining control over the breakaway region.

Martial law has also been declared in some regions of Azerbaijan.

The conflict in the Caucasus Mountains has remained unresolved for more than three decades, with periodic bouts of fighting. Border clashes in July killed at least 16 people, prompting the largest demonstration for years in the Azerbaijani capital Baku, where there were calls for the region's recapture.

On Sunday, Turkey's President Recep Tayyip Erdogan pledged support for Azerbaijan during the new crisis while Russia, traditionally seen as an ally of Armenia, called for an immediate ceasefire and talks to stabilise the situation.

Armenia's defence ministry said an attack on civilian settlements in Nagorno-Karabakh, including the regional capital Stepanakert, began at 08:10 local time (04:10 GMT) on Sunday.

A woman and child were killed, officials said.
Armenia said it had shot down two helicopters and three drones, as well as destroying three tanks.

"Our response will be proportionate, and the military-political leadership of Azerbaijan bears full responsibility for the situation," the defence ministry said.

Armenia's government declared martial law and total military mobilisation, shortly after a similar announcement by the authorities inside the separatist region.

Warning that the region was on the brink of a "large-scale war", and accusing Turkey of "aggressive behaviour", he urged the international community to unite to prevent any further destabilisation.

Azerbaijan's defence ministry said civilians had been killed or wounded by Armenian shelling of several of its villages.

It confirmed the loss of one helicopter but said the crew had survived, and reported that 12 Armenian air defence systems had been destroyed. It denied other losses reported by Armenia.

President Aliyev said he had ordered a large-scale counter-offensive operation in response to Armenian army attacks.

"As a result of the counter-offensive operation, a number of Azerbaijani residential areas that were under occupation have been liberated," he said in remarks broadcast on television.

"I am confident that our successful counter-offensive operation will put an end to the occupation, to the injustice, to the 30-year-long occupation."

Armenia's defence ministry denied any villages had been lost to Azerbaijan.-BBC