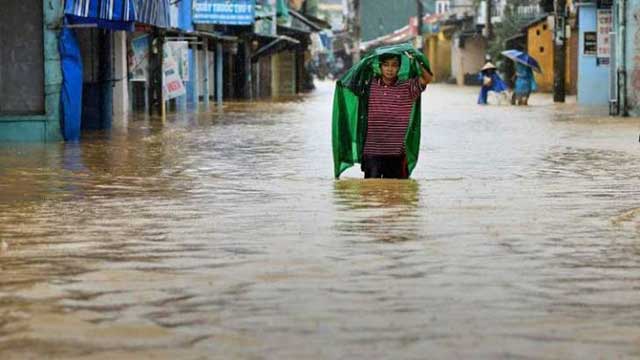 At least 105 people died and 27 others went missing in natural disaster including floods and landslides in Vietnam's central and central highlands regions.

Central Steering Committee for Natural Disaster Prevention and Control on Tuesday said the death toll rose from 90 reported on Monday to 105 reports Xinhua.

The fatalities were mainly reported in the provinces of Quang Tri, Thua Thien-Hue and Quang Nam, according to the committee's latest report.

Among the major incidents, on October 13, landslides killed 13 officials and military personnel, who had been dispatched to rescue workers trapped due to the landslide at a hydropower plant in Thua Thien Hue province.

The rescue work is still underway for the missing workers.

On Sunday, 22 military personnel were killed in the landslide that engulfed their military base in Quang Tri province.

Over 52,100 households in the localities of Nghe An, Ha Tinh, Quang Binh and Quang Tri had been evacuated to safe areas as of 5 pm. local time Monday while more than 177,900 houses in these provinces were inundated, the committee said.

More than 691,100 cattle and poultry animals have been killed or swept away. Natural disasters also caused the erosion and damage in several state highways and local roads, said the committee.

He also stressed the safety of dams and reservoirs, urging proper response plans and necessary equipment to be in place to save people and handle emerging issues.