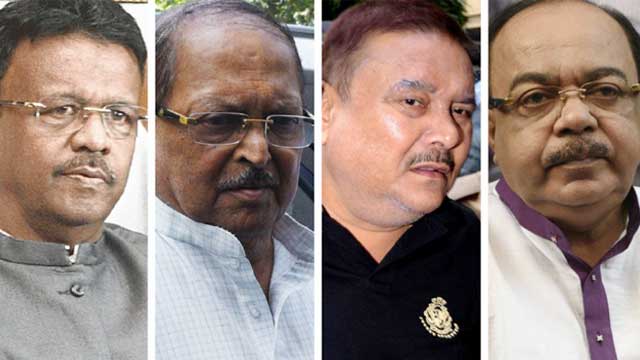 Two of Mamata Banerjee's ministers and two other leaders were granted bail today after nearly seven hours of drama and confrontation as the Bengal Chief Minister spent much of the day at the CBI office in Kolkata challenging their arrests.

Bengal Ministers Firhad Hakim and Subrata Mukherjee were arrested early this morning in the Narada bribery case. So were Trinamool MLA Madan Mitra and Sovan Chatterjee, who went from the Trinamool to the BJP but quit that party too.

Central forces arrived at their homes and took them to the CBI office. Within an hour, a furious Mamata Banerjee also landed at the CBI office in Nizam Palace and dared the investigating agency to arrest her too.

"The way they have been arrested without due procedure, CBI will have to arrest me also," the Bengal Chief Minister reportedly said during her extraordinary stake-out at the CBI lasting more than six hours.

All four were ministers in the previous Mamata Banerjee government and were seen taking bribes in the Narada bribery tapes shot in 2014.

But the Trinamool questioned why Suvendu Adhikari and Mukul Roy, former Trinamool leaders who were also on the Narada tapes, have escaped action till now.

Both were Trinamool MPs at the time but have since joined the BJP and recently became BJP MLAs.

Mamata Banerjee has repeatedly held them up as examples of the "BJP washing machine effect", a term she uses while accusing defectors of joining the BJP to escape prosecution.

Last December, a day after Suvendu Adhikari joined the BJP triggering a mass exodus from the Trinamool, his photos disappeared from the Narada tapes floating around on social media.

The Trinamool Congress has also once again accused Governor Jagdeep Dhankhar of playing a partisan role, saying he is not authorized to sanction the arrest of the three Trinamool MLAs; the assembly Speaker is. But Mr Dhankhar said he had the right to clear their prosecution as he had sworn them in as ministers when the crime was committed.-NDTV