Trump agrees to meet with Kim 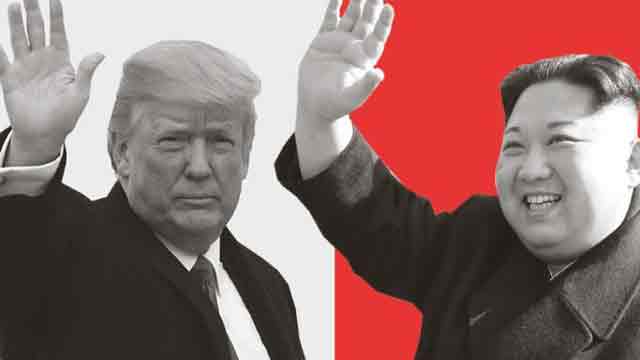 Washington, Mar 9 (Just News): The US President Donald Trump agreed on Thursday to meet with North Korean dictator Kim Jong Un by May after Kim pledged to refrain from further nuclear tests and move toward denuclearization, according to South Korean officials.

The surprise announcement was made by South Korean National Security Advisor Chung Eui-Yong in a short statement outside the White House. The White House later said no firm timetable was set.

A senior administration official said the sentiments from Kim were conveyed verbally to Trump during a briefing in the Oval Office at the White House on Thursday, denying the existence of a physical letter from the South Korean envoy to the president, which was reported earlier.

The White House confirmed that Trump would accept Kim's invitation to meet, but a senior administration official told reporters on a call after the announcement that "at this point, we're not even talking about negotiations."

"What we're talking about is an invitation by the leader of North Korea to meet face to face with the president of the United States," the official said. "The president has accepted that invitation."

Speaking anonymously, the official offered insight into why the administration would take the historic step toward meeting: Because of Kim's consolidated decision-making power in the regime, the senior official said "it made sense to accept an invite to meet with the one person who can actually make decisions" instead of continuing with the "long slog of the past."

In an earlier statement from press secretary Sarah Huckabee Sanders on Thursday, the White House said it looked forward to "the denuclearization of North Korea."

"In the meantime, all sanctions and maximum pressure must remain," Sanders said.

While the South Korean national security advisor set a May deadline during his announcement Thursday night, a senior administration official was more vague — telling reporters the time and place were "yet to be worked out," but that the meeting will come "in a matter of a couple months."

Hours before the announcement, Trump dropped by the White House press room to hint at a major announcement to come, suggesting that he was supportive.

The South Koreans were at the White House Thursday to brief National Security Advisor H.R. McMaster and other top officials on recent talks with the North Korean regime.

No sitting American president has ever met with a North Korean leader — although former president Jimmy Carter did visit the country in 1994 — and the meeting comes after months of blustering between the two unpredictable leaders.

Several GOP leaders supported Trump's decision to accept the invitation, adding that the meeting came as the result of a firm no-nonsense stance against North Korea.

"I do believe that North Korea now believes President Trump will use military force if he has to," said Sen. Lindsey Graham, R-South Carolina via Twitter on Thursday night. "The worst possible thing you [Kim] can do is meet with President Trump in person and try to play him," he added.

Sen. Ed Markey, D-Mass., said the upcoming meeting should be "the beginning of a long diplomatic process" adding that Trump "must abandon his penchant for unscripted remarks and bombastic rhetoric to avoid derailing this significant opportunity for progress," in a statement on Twitter.

Sen. Bob Corker, R-Tenn., chairman of the Senate Foreign Relations Committee, also said in a statement that sanctions were having an impact. "Skepticism and caution are critical as these discussions continue," he said.

Trump has called Kim "little rocket man," and threatened the country with destruction for its nuclear tests; Kim has called Trump a "mentally deranged dotard," and has threatened to rain nuclear fire on the West.

Earlier this week, Pyongyang signaled its willingness to hold talks with Washington on denuclearization, saying it would suspend nuclear tests while talks are underway.

Asked about the developments this week, Trump expressed optimism, saying he believed overtures from the North Koreans were "sincere," attributing them to "very, very strong" sanctions and increased pressure from China.

The International Campaign to Abolish Nuclear Weapons, which won the Nobel Peace Prize last year, said in a statement after the announcement that it "commends South Korea’s leadership in achieving history dialogue between the U.S. and North Korea, which is the only pathway to nuclear disarmament in the face of fire and fury."

The statement from the group's executive director, Beatrice Fihn, continued, "We urge both North Korea and the United States to join the majority of countries in pursuing permanent denuclearization through The Treaty on the Prohibition of Nuclear Weapons."

Japan's prime minister, Shinzo Abe, warned on local television that "until North Korea takes actual steps towards a complete inspection of their nuclear weapons and missiles, and their irreversible abandonment, this will not sway the absolute position of Japan and the United States that we will continue apply the greatest amount of pressure." Trump and Abe spoke by phone to discuss the situation, the White House said.-NBCNews