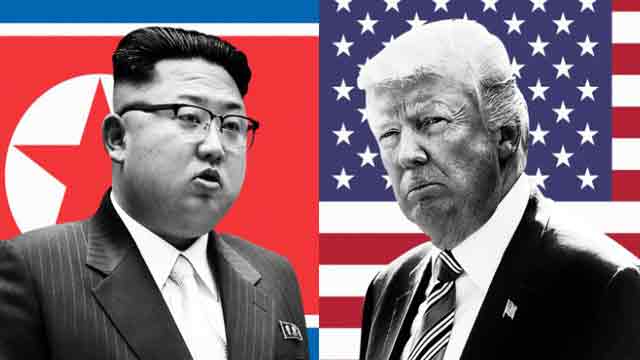 Washington, Mar 9 (Just News): Very little is known about US President Donald Trump's plans to meet North Korean leader Kim Jong Un except that the historic moment will happen before May.

It's a seismic shift in a relationship that until now has been based on repeated taunts between two leaders who last year brought the world to the brink of nuclear war.

North Korea experts said they haven't got high hopes for the unprecedented meeting, which will be the first between a sitting US President and North Korean leader.

Former US Presidents Jimmy Carter and Bill Clinton each met members of the ruling Kim family, but only after they'd left office.

Who's going and where will they meet?

The North Korean government will likely be pushing hard to bring Trump to Pyongyang, but the security situation in the capital would make it "impossible," Adam Mount, senior fellow at the Federation of American Scientists, told CNN.

South Korean President Moon Jae-in is already scheduled to meet with Kim in April at the Panmunjom Peace House in the heavily-fortified demilitarized zone between the two countries.

There's no word on who will attend the meeting, other than the two leaders.

On Wednesday, a Trump administration official told CNN they were thinking of bringing in outside help for any North Korea negotiations, due to a depleted US State Department. America's top North Korea diplomat Joseph Yun announced his surprise retirement earlier this month.

What do the North Koreans want?

For the North Koreans, it's already a big victory getting the US President to agree to meet with Kim Jong Un.

"They've been desperate since the Clinton Administration to get an American president to visit, so this has been a top North Korean foreign policy priority for years," Jeffrey Lewis, associate professor at the Middlebury Institute of International Studies at Monterey, told CNN.

"There's even a North Korean movie with the US President coming to North Korea."
Any meeting with a US leader would indicate that North Korea is a valid, nuclear state and create the perception that it was being treated as "an equal" by Washington, Lewis said.

By offering talks Pyongyang may have been trying to drive a wedge between the US and South Korea. If Trump had declined, it would have created "serious friction" with Moon and his pursuit of peace on the Korean peninsula, Mount said.

Even if the meeting doesn't materialize, Pyongyang could still claim some credit and blame the US for thwarting efforts for peace.

"Pyongyang can say they tried and resume nuclear and missile testing," he said. "They don't come out behind."

What does the United States want?

The United States has repeatedly made clear it wants North Korea to denuclearize.
US President Trump had previously said he wanted to see "credible moves" towards denuclearization by Pyongyang before talks could even begin.

But experts say the administration needs to lower its expectations of the Trump-Kim meeting, adding that it was very unlikely Kim would be willing to give up his nuclear capabilities.

"They've staked a lot of their reputation on solving the North Korea problem," Mount said. "So if talks don't get very far, if Trump gets stonewalled, if he gets outmaneuvered, if the US has to walk away from the table, (Trump) certainly doesn't come out ahead."

Instead, experts say the US needs to start small and seek small, solid concessions from the North Koreans, such as a cap on Pyongyang's arsenal or a continued pause in missile testing.

"The challenge is that the North Korea regime is a global champion, along with the Iranian regime, in playing us as fools," Mark Dubowitz, CEO of the Foundation for Defense of Democracies, said in a statement.

What do the South Koreans think?

South Korean President Moon has been pushing hard for a rapprochement with Pyongyang since he came into office in 2017.

But while the meeting between the US and North Korea is a victory for Moon, some South Koreans will be more skeptical, said Duyeon Kim, visiting senior fellow at the Korean Peninsula Future Forum.

If the meeting does lead to tangible results, including denuclearization, there could be huge consequences for South Korea and the US' other allies in the region.

Japanese Prime Minister Shinzo Abe told reporters Friday that he'd spoken with Trump on the phone and both were committed to exerting "maximum pressure" on North Korea until it shows "concrete actions toward denuclearization."

Experts have low expectations for the outcome of the meeting, if indeed it goes ahead.

"We've seen this movie so many times before," said Duyeon Kim.

With the US clearly looking for steps towards denuclearization and the North Koreans unlikely to give up their nuclear deterrent, experts said it was hard to see where an agreement could be made.

Lewis said there was a possibility the meeting could help Trump and Kim build a "friendly rapport," leading to a period of reduced tensions, in the style of former US President Richard Nixon's visit to China in 1972.

"Equally possible is an evil dictator pockets the concessions, points out to the world how (Iraqi dictator) Saddam and (Libyan dictator) Gaddafi are both dead because they gave up the bomb," Lewis said. "He didn't, and he got a US state visit."

All experts agreed there is no way North Korea will give up its nuclear weapons.

"There is zero chance Kim Jong Un is going to agree to international inspections that dismantle his nuclear arsenal in the next several months," Mount said.-CNN