4 shot outside baseball stadium in US capital 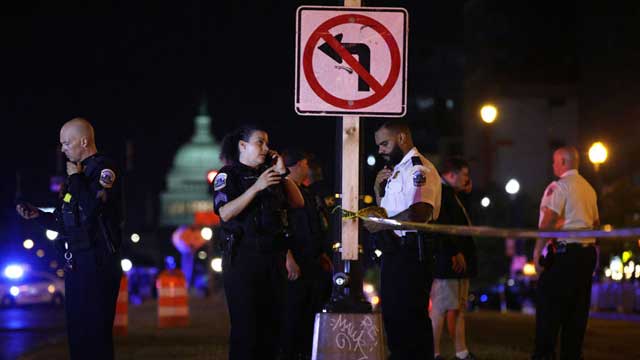 Four people were shot outside a baseball stadium crowded with thousands of spectators in the US capital on Saturday, causing the game to be abruptly halted as fans were ushered out.

Police said four people had been shot but there was ‘no ongoing threat,’ without clarifying the condition of the gunshot victims.

AFP journalists who were at the game said some spectators had rushed for the exits after hearing a dozen or more gunshots outside the stadium, while others remained in their seats at the announcer’s initial urging.

Several bursts of automatic gunfire could be clearly heard in the stadium in footage of the game posted on social media.

The United States has a long and painful history of deadly gun violence, in the form of a steady daily toll of shootings as well as high-profile mass killings that have targeted schools, work places and shopping centres.

The lights of multiple police cars lit up the street and sirens could be heard as the crowd attending the game between the Washington Nationals and the San Diego Padres was then asked to leave the stadium.

Police tweeted officers were ‘responding to a shooting in which two people were shot outside of Nationals Park,’ in the Navy Yard neighbourhood of southern Washington, DC.

‘This is currently an active investigation and it appears there is no ongoing threat at this time,’ it added.

Shortly after, the department tweeted that ‘two additional victims associated with this incident walked into area hospitals for treatment of gunshot wounds.’

The Washington Post quoted police as saying two of the wounded had non-life-threatening injuries, with a man shot in the leg and a woman shot in the back.

The condition of the other two people who showed up at hospitals were not known.

An intersection by the Third Base Gate where the shooting occurred was sealed off by police.

Minutes after the incident, the Washington Nationals official account tweeted that ‘a shooting has been reported outside of the Third Base Gate at Nationals Park’ and encouraged fans to exit the ballpark.

Players had headed for the dugouts after the shots rang out and the game was suspended in the bottom the 6th inning, with the Padres leading by eight runs to four.

The game is to be resumed on Sunday.

There have been just over 100 homicides in Washington this year, many of them involving firearms.

Police on Saturday offered a $60,000 reward after a six-year-old girl was shot dead the day before while riding a scooter in southeast Washington.